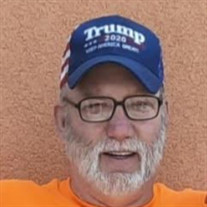 James David Canon, son of Keith and Peggy Canon, was born on March 19, 1962, in Kansas City, Missouri and departed this life at his home in Buffalo, Missouri on the morning of August 6, 2021. David was saved in 1973 and a member of Hopewell Free Will Baptist Church. David was raised in Tunas, Missouri and graduated from Macks Creek High School. He thoroughly enjoyed playing basketball, riding motorcycles, deer hunting, and spending many endless hours with his father and uncles in the milk barn and hayfields. David made countless friendships growing up, many of which continued through his life. After graduation, David continued milking at his dairy farm. In September of 1981, David was united in marriage to Diane Rogers. To this union, two children were born. To care for his family, David made a career out of over the road trucking and to him, nothing could beat a good ole long nose Peterbilt on the open road. The many years he spent behind the wheel allowed him to become a walking road atlas, not hesitating to give his opinion (even if you didn’t need it) on the best route to take anywhere. When they could, his family would travel alongside in his Peterbilt, which led to many cherished memories on these special vacations. Western books, Western shows, and Classic Country music were favorites for David. He frequently traded Western books with his father and uncle to fully experience the Old Time West. If he wasn’t reading, he would be occupying his time watching old Western shows such as: The Rifleman, Branded, Bonanza, and Gunsmoke; and in his mind there could never be a bad John Wayne Western. While driving, he would frequently listen to Merle Haggard, Red Sovine, George Jones, Johnny Horton, and Hank Williams Sr. David had several hobbies; his favorite was spending time with his stepdad while restoring his 1947 Ford Super Deluxe Coupe. If he wasn’t in the garage, he was renovating the house, in the lawn helping tend to the roses, fixing anything broken, or fulfilling Diane’s honey-do-list. David was proceeded in death by his father, Keith Canon; grandparents, Morris and Wanza Canon, and Harry and Pauline Dampier. He is survived by his wife, Diane Canon (Buffalo); his children, Kelsey Stubblefield (Buffalo) and Aaron Canon (Springfield); his grandson, Andrewaka Doodlebutt; his mother and stepfather, Peggy and Harvey Stark (Tunas). He is also survived by several family members and friends who will dearly miss him. David’s greatest joy in life, was his wife, kids, and being the greatest grandpa ever. He was a devoted husband and father; his love for his family grew greater day after day. Graveside services will be held on Monday, August 16, 2021, at 10:00 a.m. at Macedonia cemetery in Buffalo, Missouri.

James David Canon, son of Keith and Peggy Canon, was born on March 19, 1962, in Kansas City, Missouri and departed this life at his home in Buffalo, Missouri on the morning of August 6, 2021. David was saved in 1973 and a member of Hopewell... View Obituary & Service Information

The family of James David Canon created this Life Tributes page to make it easy to share your memories.

James David Canon, son of Keith and Peggy Canon, was born on...

Send flowers to the Canon family.