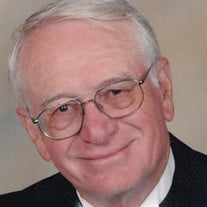 James “Jim” Jackson died peacefully in his sleep on October 19, 2020 after a lengthy illness. He was preceded in death by his wife of 59 years, Patricia Rea Jackson. He is survived by his three children, Sr. Teresa Jackson of the Monastery of St. Gertrude, Cottonwood, Idaho, Dr. Christopher Jackson (Fran Smallson) of Berkeley, California, Dr. Steven Jackson (Andrea Lopez) of State College, Pennsylvania. Also surviving are grandchildren Shelagh Jackson of Indiana, PA and Benjamin Jackson of Berkeley, CA and his sister Anita McConnell (Duane) of Ridgecrest, CA. Jim was born in Buffalo, Missouri in 1934 to Ralph and Lucile Jackson and graduated from Buffalo High School in 1952. He married Patricia Rea (daughter of Byron and Crystal Rea of Buffalo) in 1956. He was a graduate of University of Missouri, Columbia, in 1956 and received a Juris Doctorate from University of Denver in 1959 where he was also editor of the law review. All three of his children were born in Denver, his daughter while he was in law school and his twin sons while he was studying for the bar exam. He moved to the Bay Area in 1959 and to Cupertino in 1963 and practiced law in Cupertino, California for over 45 years until his retirement in 2009. Jim will be most remembered for his activity in community affairs, having served two terms on the Cupertino City Council and as mayor in 1975-1976 and 1978-1979. He was named Cupertino Citizen of the Year in 1982. A strong believer in regional planning, he served on the Association of Bay Area Governments (ABAG) in a number of capacities, and he ran for County Supervisor in 1980. Although he lost that race, he befriended the winner and encouraged her to pursue her political career. Jim also said that losing the race for supervisor was the best thing to happen to him; he turned to his next big project of starting a community bank. He founded Cupertino National Bank and served as the chairman of the board. Cupertino National Bank merged with Greater Bay Bank and was eventually incorporated into Wells Fargo. As one of his fellow board members noted, he started out knowing nothing about banking, but he learned quickly and he knew the community. Jim also was exceptionally generous with his time and involved in a number of Cupertino and Santa Clara Valley non-profits. His legal specialization was in estate planning and charitable giving and thanks to his expertise and generosity many local organizations have benefited from charitable giving. He was longtime member of the Northwest YMCA, the Lions Club, President of the Cupertino JayCees Club, an active member of the Rotary Club and Cupertino Rotary Endowment Foundation, the Cupertino Education Endowment Foundation, the Foothill-De Anza Foundation, Opera San Jose Endowment, and board of directors of Lincoln Law School. Jim’s sense of humor was well known to his friends and community. Starting off as a teenager with a comedy show on KBHS in his hometown of Buffalo, Missouri, he always enjoyed laughing and making other people laugh (or groan, depending on the joke!). He enjoyed writing a humorous newsletter for his legal clients “The Law and You” complete with cartoons, and all of the lawyer jokes he could find. He took over editorship of the Cupertino Scene while mayor and transformed a staid municipal newsletter into something with a light touch, such as his “proposed resolutions” banning rain during one particularly wet winter, or to mandate leashes for pet rocks during that popular 1970s craze. In all of this he was helped by his life partner and wife, Patricia Jackson, who was a community leader in her own right, Cupertino Citizen of the Year in 1996, President of the Chamber of Commerce, Rotary Club leader, and member of the Cupertino Library Commission, among others. Jim and Pat enjoyed golf, the symphony and opera, and traveled extensively, visiting Hawaii and Europe multiple times, China, Japan, and Latin America and the Caribbean. Jim’s last travels were a peaceful riverboat cruise up the Columbia River in 2019, though he had hoped to do more. He will be remembered for his incredible dedication to the ideals of the Democratic Party in providing a more equitable, just life for everyone. He remained intensely involved in politics, donating to causes and candidates and hoping to make Cupertino, the Santa Clara Valley, the Bay Area, California, the United States and the world better places for everyone. His last public action was to cast his ballot in the 2020 election. Jim was ever generous with his time, unwaveringly optimistic, irrepressibly enthusiastic, uncomplainingly hard-working, excessively selfless, and always smiling. A celebration of life will be held at a later date. Burial has taken place in Buffalo, Missouri where he was born, next to his late wife Pat Jackson. In lieu of flowers, donations can be made to the Jackson Family Education Scholarship at De Anza College by making a check payable to FHDA Foundation with Jackson Scholarship in the memo line and mailing to 12345 El Monte Road, Los Altos Hills, CA 94022 or give online at: https://secure.donationpay.org/fhda/

James &#8220;Jim&#8221; Jackson died peacefully in his sleep on October 19, 2020 after a lengthy illness. He was preceded in death by his wife of 59 years, Patricia Rea Jackson. He is survived by his three children, Sr. Teresa Jackson of the... View Obituary & Service Information

The family of James "Jim" Jackson created this Life Tributes page to make it easy to share your memories.

James “Jim” Jackson died peacefully in his sleep on October 19,...

Send flowers to the Jackson family.