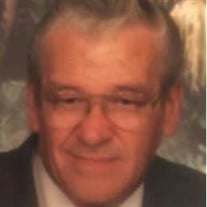 James Vincent Macella Sr. “The Moose” “Chicago Moose” “Moose Jaw” Jim was born January 5, 1938, in Chicago, Illinois to Otto and Jennie Macella. He was a meat cutter by trade, taught by his father and uncle, he lived a large portion of his life in Chicago and the surrounding area until he joined the US Navy for a short while, serving on the USS Laity, alongside Ross Perot. Jim met the love of his life, Marijo, in July of 1979 and made her his bride on June 28, 1980. They celebrated 38 years of marriage together and happily raised 8 children. Jim moved his family to Missouri in 1980, setting up roots that would help to bind his family together for many years to come. He attended St. Williams Catholic Church and grew to love the community and fellowship with the many parishioners. He enjoyed cheering for the St Louis Cardinals baseball, watching his daily soap opera, Days of Our Lives and enjoying great food…no one appreciated a fine cut of meat more than him. Jim was glad to have been able to see his beloved Chicago Cubs finally win their World Series Championship in 2016. Those who knew Jim, knew his quirky sense of humor, his thick Chicago accent and his stories of the “Back when I was growing up…” Jim passed away peacefully in his home surrounded by people he loved on September 16, 2018. He was 80 years old and had lived a full life. He was proceeded in death by his father, Otto Albert, mother, Jennie Louise (Colsmann), brother, Fred Otto, and great granddaughters, Amber Marley McKenzie and Brittany Lynn Kugler. Jim is remembered and memorialized by his wife, Marijo (Barry) of their home in Buffalo, Missouri, and 8 children, James Macella Jr of Springfield, Missouri, Dawn (Edward) Kouma of Buffalo, Missouri, David (Karen) Macella of Ozark, Missouri, Melody (David) Frazier of Springfield, Missouri, Leslie Cook of Sacramento, California, David (Jennifer) McKenzie of Pinellas, Florida, Jennifer Macella of Buffalo, Missouri, and Eric (Nicole) Macella of Charity, Missouri, his siblings Joan (Wayne) Brown of Sanibel Island, Florida, Bill Macella of Fort Meyers, Florida and sister in law Joyce Macella of Wisconsin. He also leaves behind 23 grandchildren and 22 great-grandchildren and many nieces, nephews and many close friends who will all miss him terribly.

The family of Mr. James Vincent Macella, Sr. created this Life Tributes page to make it easy to share your memories.

Send flowers to the Macella family.