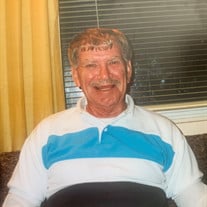 James (Chub) William Sweaney, son of Claude and Elva (Keith) Sweaney, was born on November 30, 1933 and departed this life on August 6, 2020. He was 86 years of age. He was raised on the family homestead and lived out most of his life on that same property. He attended elementary school at White Palace and graduated from Buffalo High School. While in high school he worked for the Copper Atteberry Floral greenhouse and Ward Rea. He served in the military from 1955 to 1957 in the 321st Airborne as a paratrooper. He earned a National Defense Service Medal, Parachutist Badge, and a Marksman Medal. He married Nora Ann Steinbeck in 1961 and to this marriage two children were born, James A. and Karri. For a short time they lived in Kansas City where Jim worked at Bendix. They returned to his home in Dallas Co. and he worked a short time at Detroit Tool. He then started a lifelong career with the railroad being employed as a machinist for 29 years. He was always proud of his strong work ethic and the time he spent there. Upon his retirement he lived out his days at his home. He was known for spoiling children, front porch sitting, telling stories, coffee shop talking and driving the loop. There wasn’t a story about the area he didn’t know and tell. He loved his hilltop and never tired of passing down stories of his family’s history. He was always busy creating new things and was seldom idle. He was an independent man who taught us all what it was to work and be honest, good people. Jim was preceded in death by his parents, Claude and Elva Sweaney; his brother, Dillard Sweaney; and his, sister Dixie (Sweaney) Hensley Cross. He is survived by his son, James & wife Sharon Sweaney; daughter, Karri & husband Rhett Elia; grandson, Steven & wife Micala Phillips; granddaughter, Monica & husband Brett Manzcuk; granddaughter, Jackie & husband Reil Baron; grandson, Trey Carter; seven great-grandchildren; sister, Joanne (Sweaney) Stilen; sister, Marsha (Sweaney) Martin; and brother, Randall & wife Brenda Sweaney. Graveside memorial services will be held at 10:00 a.m. on Saturday, August 15, 2020 in the New Hope Cemetery in Louisburg, MO under the care and direction of the Cantlon- Otterness & Viets Funeral Home of Buffalo. In lieu of flowers the family requests donations be made to the Sweaney Riverview Cemetery Fund or the charity of the donor’s choice.

James (Chub) William Sweaney, son of Claude and Elva (Keith) Sweaney, was born on November 30, 1933 and departed this life on August 6, 2020. He was 86 years of age. He was raised on the family homestead and lived out most of his life on... View Obituary & Service Information

The family of Mr. James William Sweaney created this Life Tributes page to make it easy to share your memories.

Send flowers to the Sweaney family.