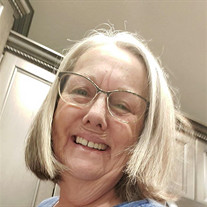 Jenny Ellen Peterson was born April 10, 1956, in Waynesville, MO to Grace Bartlett and Leonard Peterson. She had 6 brothers and 1 sister. She attended Central High School in Springfield, Missouri. In 1972 at the age of 16, she married Leroy Paul Novak on the 4th of July at his family home in Long Lane, Missouri. Together they traveled the world in support of Leroy’s career in the United States Navy. Places they lived included Iceland, Cuba, Puerto Rico, Florida and Virginia. They enjoyed traveling around the areas they lived and meeting new people. They had three sons and her main occupation was raising their boys. During her time as a Navy spouse, she worked a variety of retail jobs. She completed her GED and attended Cosmetology school. She was later an instructor at a cosmetology school. She volunteered in the Navy Wives Club and served as a cub scout den mother. She was an active member of her local churches. She also did various entrepreneurial ventures with sewing and crafting. In 1995 the couple returned to the farm in Missouri after Leroy’s retirement from the military with their youngest son to enjoy their time together. During retirement the couple continued to travel to other areas to include Germany and Washington state visiting their family. Jenny enjoyed cooking, sewing and crafting. She also enjoyed sharing her faith with her children and Grandchildren. Jenny’s career after Leroy retired from the Navy was selling advertising specialties. She owned BDADCO and traveled frequently across the state visiting stores and building relationships with clients. Her youngest son joined her in business during the fall of 2018. Jenny shared her love and caring with many people. Her home was often filled with nieces and nephews, friends of her children, and friends of her grandchildren. Having a home filled with people brought her great joy. She spent time caring for several family members at the end of their lives to include her mother-in-Law (Inez Novak), sister-in-law (Beverly Jean Novak), husband (Leroy Paul Novak) and most recently her mother Grace. In late June of this year Jenny contracted the COVID 19 virus. While able she continued to care for her mother at home. As her illness progressed, she was hospitalized at Citizens Memorial Hospital in Bolivar, Missouri. On Friday, 30 July 2021, Jenny succumbed to complications of her illness and passed on to her eternal reward. Jenny is preceded in death by her parents Grace Bartlett Perryman and Leonard Peterson. Her death was also preceded by her brothers Norman Ray Peterson, Dean Leon Peterson, Larry David (Ike) Peterson, Richard Lee Peterson, and sister-in-law, Beverly Jean Novak. In 2016 her husband Leroy also preceded her in death. Jenny is survived by her brother Darold (Wanda) Peterson of Richland, MO, Ronald Peterson of Halltown, MO, and sister Mary (Lindy) Peterson of Springfield, MO. She is survived by her children Shawn Paul (Tina), Pound, Virginia, Jimmy Lee (Heather) DuPont, WA, and David Wayne Long Lane, MO. She leaves behind 8 grandchildren, 2 great grandchildren and numerous nieces, nephews and cousins. Graveside service will be held 1:00 p.m. Friday, August 6, 2021 at the Riverview Sweaney Cemetery in Buffalo, Missouri under the direction of the Cantlon-Otterness & Viets Funeral Home of Buffalo, Missouri. Visitation will be from 7:00 to 9:00 p.m. Thursday, August 5, 2021 in the Cantlon-Otterness & Viets Funeral Home of Buffalo, Missouri

Jenny Ellen Peterson was born April 10, 1956, in Waynesville, MO to Grace Bartlett and Leonard Peterson. She had 6 brothers and 1 sister. She attended Central High School in Springfield, Missouri. In 1972 at the age of 16, she married Leroy... View Obituary & Service Information

The family of Jenny Ellen Novak created this Life Tributes page to make it easy to share your memories.

Send flowers to the Novak family.