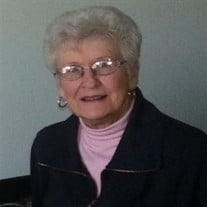 Jenora Louise Sharpe was born on October 30, 1930 in Foose, Mo., daughter of John T. and Maude P. Lambeth (Beck). She passed away peacefully at 1:55 a.m., May 30th with her children at her bedside. She was born the 8th child to John and Maude, and she had 4 sisters and 3 brothers, all who proceed her in death. Sisters Hazel Lilley, Faye Wyrick, Geraldine Tracy, Jeanne Wallace, and brothers Bertram, Wayne and Clinton Lambeth. Growing up in Foose, Jenora attended school at Church Grove in a one room schoolhouse, where she remembers her Dad carrying her on his back, to and from school. Also, Jenora's older sister Geraldine actually taught her one year. As she got older and her siblings left the home, she began her interest in piano playing. Her piano teacher told her parents that she didn't need sheet music; She could hear the song and play it back, note for note. Piano playing ended up being one of her most favorite hobbies. She graduated from Buffalo High School in 1948, and one year later married Dale Sharpe of Buffalo on January 1, 1949, in Sedalia, Mo. To this union, 2 children, son Kevin and daughter Kyle were born. Dale and Jenora made their home in Buffalo where they owned several businesses; Sharpe's Conoco/Unique Cafe at the corner of Hwy 65/32, Sharpe's Mobil and Sharpe Motors which is currently still in business. Jenora professed her faith at a very young age and was also a faithful member of the Buffalo United Methodist Church in Buffalo, for 55 years. She was involved in choir and ladies’ groups and filled in on piano when needed. Providing a loving home for her children, grandchildren and great-grandchildren were among her most treasured times. Both granddaughters remember going to MaMa's and getting away with just about anything they wanted. And the Great Grands loved MaMa Dora and her endless supply of cookies. During her later years, she moved to Pine Lodge Assisted Living after the sale of her home, and then when health failed her, she relocated to Springfield to be near her daughter. She resided in James River Nursing and Rehabilitation and Birch Pointe Health and Rehabilitation where she was able to share a room with her big sister Geraldine Tracy. So many fond memories made there until Jerry's passing in May 2018. Jenora last resided at Maple Wood Special Care facility, until the time of her death. Jenora is survived by her son, Kevin and wife Robin of Buffalo, daughter Kyle and husband Donnie of Springfield, Granddaughters Ashley Chapman and husband Brandon of Ozark, Hillary Scott and husband Matt of Springfield. Great grandchildren Kaden and Harper Chapman, and Carter Scott. Nieces Erlene Jessen, Paula Manchester, Linda Moran, Patty Wyrick, Janet Tracy, Gayla Arnold, Jonna Padgett. One nephew, Hugh Wyrick, who all referred to her as "Aunt Norie” and loved her unique sense of humor. Jenora's family would like to express their sincere gratitude in all who helped in her care these past few years. A special thanks to Linda, Lasha and Shilah., and a huge thank you to the team at Haven Hospice for their compassionate attention during the past few months. Services are 2:00 Monday, June 3, 2019 at Cantlon-Otterness Viets Funeral Home in Buffalo with the Reverand Mark Mildren officiating, with visitation at 12:30 prior to the service on the same day. Internment in Maple Lawn Cemetery in Buffalo. For a choice in lieu of flowers, the family asks for donations to Dallas Co Meals on Wheels program or the Breast Cancer Foundation of the Ozarks.

Jenora Louise Sharpe was born on October 30, 1930 in Foose, Mo., daughter of John T. and Maude P. Lambeth (Beck). She passed away peacefully at 1:55 a.m., May 30th with her children at her bedside. She was born the 8th child to John and Maude,... View Obituary & Service Information

The family of Mrs Jenora Louise Sharpe created this Life Tributes page to make it easy to share your memories.

Send flowers to the Sharpe family.