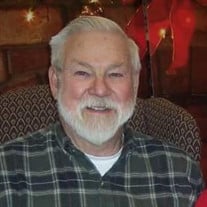 Jerry Gene Nickels, son of the late Herbert W. and Remember Lee (Purdy) Nickels, was born on September 12, 1936 in Hot Springs, Arkansas, and departed this life on March 3, 2019 at his home near Long Lane, Missouri. At the time of his passing he was 82 years, 5 months, and 20 days of age. Jerry spent his early years in Hot Springs, AR before moving to Bakersfield, CA when he was about 10. After his schooling he joined the United States Navy where he served his country for four years and then two more years in the Navy Reserves. After his service, he began working for an advertising agency, ran catering trucks, owned a gift shop, and owned a restaurant in and around Ridgefield, CA. He met Alice Creel and they were united in marriage on December 31, 1984 in Medford, OR. They made their home in Medford, OR, Vancouver, WA, and moved to Buffalo, MO in 1992. Jerry went to work for Kropf Feeds and also ran an Ice Cream Truck. He was known as “Papa Chuck the ice cream man” to all the kids. He loved raising chickens, taking care of his dogs, goats, and llamas, and wanted to build a bio dome. Jerry loved to read and would spend hours researching things he was interested in. Jerry was preceded in death by his parents and two brothers, Don and Bob Nickels. He is survived by his wife Alice of the home; two sons, Ronald Wayne & wife Bonnie Nickels of Battlefield, WA and Rodney Gene Nickels of National City, CA; four grandchildren, Joshua, Janetta, Jason, and Rebecca; and three great-grandchildren, Brody, Scarlet, and Willo. Memorial services will be held at 10:00 a.m. on Saturday, March 16, 2019 at the Calvary Chapel Freewill Baptist Church with Dr. Douglas Earls officiating. Cremation rites were accorded under the direction of the Cantlon Otterness & Viets Funeral Home of Buffalo.

Jerry Gene Nickels, son of the late Herbert W. and Remember Lee (Purdy) Nickels, was born on September 12, 1936 in Hot Springs, Arkansas, and departed this life on March 3, 2019 at his home near Long Lane, Missouri. At the time of his... View Obituary & Service Information

The family of Mr. Jerry Gene Nickels created this Life Tributes page to make it easy to share your memories.

Send flowers to the Nickels family.