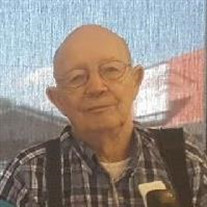 Jesse Lloyd Carter died July 20, 2019 in Buffalo, MO. Born January 18th,1935 in Tunas, MO, Jesse was the son of Ira (Pet) and Dolly Carter. He graduated Tunas High School in 1953, enlisted in the U.S. Army, and married Wilma June Swanigan on August 5th, 1956. They lived the first half of their married life in Independence, MO, raising two daughters while Jesse worked at Manor Bakery and Hi-Boy Drive In, until they decided to retire home to Tunas in 1984. Not one to remain idle, Jesse found work at the Dallas County Livestock Auction, and finally the Dallas County Assessor’s Office and retired as a Dallas County purchasing agent in 2005. After losing Wilma to cancer in 2000, he married Dorotha Hill of Buffalo in March of 2001, who survives of the home. Additional survivors include siblings Kenneth Carter (and wife Reba) of Marshall, MO, Karl Carter (and wife Daralene) of Lone Jack, MO, Nellie Rapp (and spouse Paul) of Oak Grove, MO, Joseph Carter of rural Marshall, MO, Gladyce Honsinger of Lees Summit, MO. Children are Kimberly Jones (and spouse Allan) of Lincoln, MO, and Kellie Presley of California, MO. Stepchildren include Debbie Hill (and spouse Larry Lynch) and Laryssa Larimer (and spouse Jeff), all of Strafford, MO. Jesse also has six grandchildren and two great-grandchildren. He was preceded in death by his parents and three siblings: Shirley Fowler, Richard Carter, and Darrel Carter, as well as a son-in-law Jeff Presley. Funeral services will be conducted at 10:00 a.m. on Wednesday, July 24, 2019 at the Cantlon Otterness & Viets Funeral Home with Bro. Aaron Taylor officiating. Escorts will be Alex Jones, Jay Presley, Lauryn Peters, Kaylee Larimer, Jason Presley, and Aaron Presley. Interment will be in the Plad Cemetery under the care and direction of the Cantlon Otterness & Viets Funeral Home of Buffalo. Visitation will be from 6:00-8:00 p.m. Tuesday at the Funeral Home. In lieu of flowers, the family requests donations be made to the Plad Cemetery.

The family of Mr. Jesse Lloyd Carter created this Life Tributes page to make it easy to share your memories.

Send flowers to the Carter family.