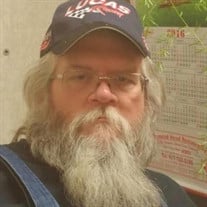 Jimmy Dean Carter was the middle child of Ronald Dean Carter and Marie (Dorman) Carter. He was born January 3, 1965 in Springfield, Missouri and grew up in Urbana, Missouri where he attended school at Skyline. He was baptized at Olive Point Baptist Church March 10, 1974. On January 5, 1991 Jimmy married Kimberly Dawn Garrison and was later blessed with two sons: Stiel Ray (27) and Stone Dean (24). They lived in several surrounding towns before finally settling in Urbana. Jimmy worked as a truck driver for almost 40 years. He loved this job and took pride in pointing out roads and parking lots that he had worked on and being able to give the best directions when Kimmy would get lost. He enjoyed spending time in his shop mechanicing and working on his and the boy's racing truck and was looking forward to getting it "just right" so he could race it one more time. He loved getting to spend time with his boys no matter what they were doing. His greatest joy came in 2014 when he became Pap to his first grandson Layne Eli. He would tell anyone who would listen about things Layne had said or done. He was blessed again in 2019 when his second grandson Barrett Ridge Dean was born and loved when Barrett would give him dirty looks because he just wasn't sure about his Pap. He was anxiously awaiting the arrival of his first granddaughter Willow Dean. When he went into the hospital, he told several caregivers that he had to "get better before the baby comes!" Jimmy is survived by his wife Kimmy, son Stiel and his wife Lindsey and their children Layne and Barrett, son Stone and his fiancé Jordan Roam and their child Willow. He is also survived by his parents R.D. Carter and wife Charity and Marie Carter; his sister Lisa Henderson and her children Nicholas, Jordan, and Morgan; his brother Dale Carter and his wife Rachel and their children Nicole, Sammi, Alli, Jenna, and Bryndon. Jimmy was deeply loved and will be greatly missed by his family and friends. Funeral services will be held at 10:00 a.m. on Saturday, August 1, 2020 in the Cantlon-Otterness & Viets Funeral Home in Urbana with Chris Pedersen officiating. Escorts will be Dale Carter, Chase Glor, Will Carneal, Logan Carneal, Colson Kirk, Brandon Keller, Greg Lindsey, and Darin Wilson. Honorary escorts will be Nick Henderson, Jordan Henderson, Bryndon Carter, Ryan Melton, Scott Miller, Dawson Owen, Kenton Owen, Mike Owens, Steve Bybee, and Ransom Spicher. Interment will be in the Howard Chapel Cemetery under the care and direction of the Cantlon-Otterness & Viets Funeral Home of Urbana. Visitation will be from 6:00-8:00 p.m. Friday at the Funeral Home.

Jimmy Dean Carter was the middle child of Ronald Dean Carter and Marie (Dorman) Carter. He was born January 3, 1965 in Springfield, Missouri and grew up in Urbana, Missouri where he attended school at Skyline. He was baptized at Olive... View Obituary & Service Information

The family of Mr. Jimmy Dean Carter created this Life Tributes page to make it easy to share your memories.

Send flowers to the Carter family.