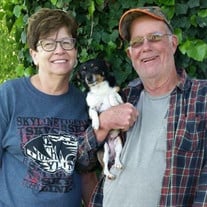 John Melvin Alexander, 68 of Tunas, MO passed away Monday March 1, 2021. John was born on September 22, 1952 in Urbana, MO to James and Eileen Alexander. He graduated from Tunas High School in 1970. On November 20, 1973 he married Sandy Claspill, then welcomed three children Stephanie, Jenny, and Mike. After high school John went to work at Chapman’s Furniture in Buffalo, MO. He worked at Scott’s where he met Harold Sneed and got into bulldozing. He ran a bulldozer the majority of his life. Family was the most important thing to John. He loved being surrounded by his wife, kids, and grandchildren. He enjoyed hunting and fishing. He spent many days crappie fishing. When the fish were not biting, he searched the banks for arrow heads. He had a very big heart and would help anyone. He did not know a stranger; he was a firm believer in God and never judged a book by its cover. John never went anywhere without his dog Ellie, he was the happiest at his home in Tunas, MO. For anyone who knew John knew that he was one of a kind and will not be forgotten. John was preceded in death by parents, James and Eileen Alexander. He is survived by his wife Sandy of the home; his children, Stephanie Bishop of Buffalo, MO, Steve & Jenny Conly of Tunas, MO, Mike Alexander of Tunas, MO, and Jim & Pam Alexander of Tunas, MO; his grandchildren, Brandon and Shania Bishop, Ashley and Cord Petersen, Stevie Conly, Kyler & wife Mandy Conly, Riley Conly; and many great-grandchildren, nieces, nephews, and friends.

The family of John Melvin Alexander created this Life Tributes page to make it easy to share your memories.

Send flowers to the Alexander family.