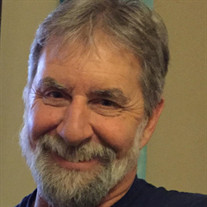 John Victorino Jr. left this life on Wednesday March 20th, 2019 in Fair Grove, Missouri. John was born November 30th, 1958, in Freemont, California to John and Hilda Victorino. At the age of 15, John started working forty hours a week at an auto store- while he was still attending high school, to buy his first pickup truck. This began his commitment to hard work, which he continued throughout his lifetime. John began his diesel mechanic certification while still in high school and went on to become an Owner/Operator for United Van Lines. John enjoyed working with the land, which he was able to do when maintaining his almond ranch in California. John was an avid NASCAR fan and attended many races in the Napa Valley area. John met his loving wife, Connie Victorino in 2005 and settled in Fair Grove, Missouri where they enjoyed many happy years together, traveling and spending time with friends and family. John adored his grandchildren and nieces and nephews and could frequently be found saving coins to fill piggy banks, teaching them to drive the tractor and lawn mower, and feeding the turkeys and deer on his land. John is preceded in death by his parents. He is survived by his wife Connie, step daughters Lindsey Stanchak (husband Jimmy) and Lauren Young (husband Zack), grandchildren Kai, Emily, Karlee, and Lola, sisters Theresa Stevens (husband Larry) and Debbie Fratangelo (husband Vince), nephew Ryan, nieces Lisa and Nicole, and many beloved friends and extended family. Memorial Visitation for John will be 2:00 p.m. Sunday March 24, 2019 in the Cantlon Otterness & Viets Funeral Home in Buffalo, Missouri Cremation Rites will be accorded by Cantlon Otterness & Viets Funeral Home of Buffalo

The family of Mr. John Victorino Jr. created this Life Tributes page to make it easy to share your memories.

Send flowers to the Victorino family.