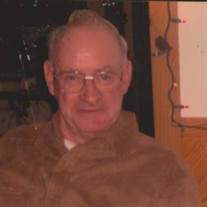 Johnny Ray Buntin, son of Raymond Buntin and Ermel (Goatcher) Buntin, was born in Whitesville, Missouri on October 6, 1937 and passed away in the Cox South Hospital in Springfield, Missouri on Thursday, November 4, 2021. He was at the time of his passing 84 years of age. Johnny graduated from Craig High School in Rosendale, Missouri. He was united in marriage to his late wife, Shirley Buntin, on June 3, 1960 and to this union was born five children. He spent his career working as a truck driver and then a dispatcher. He was a hard-worker and did everything with excellence. Johnny was a member of Galmey Community Bible Church. He found joy in playing guitar for the church band and was very dedicated to his church family. He also loved to farm, fish, and have jam sessions where he would play his guitar some more. Johnny is preceded in death by his wife; his parents; a brother, Donnie Buntin; a daughter, Deborah Harris; a grandson, Christopher Dye; and a granddaughter, Candie Dye. He is survived by four children, Michael Dye and wife Sandra, Rick Dye and wife Nancy, Corrina Austin and husband Martin, Raymond Buntin and wife Kathy; 15 grandchildren; and 26 great-grandchildren. He was loved by many and will be greatly missed. Services will be held at Galmey Community Bible Church located at 21000 State Highway 254 Wheatland, MO 65779 on Tuesday, November 9, 2021 at 1:00 p.m. with Rev. Bob Townsend officiating. Pallbearers will be Joe Austin, Brandon Buntin, Bryce Buntin, Riley Peterson, Johathan Dye, and Brad Hurd. Honorary Escorts are Brian Armstrong and Martin Austin. Internment will follow at Maple Lawn Cemetery in Buffalo, Missouri under the care and direction of Cantlon-Otterness & Viets Funeral Home in Buffalo, Missouri.

Johnny Ray Buntin, son of Raymond Buntin and Ermel (Goatcher) Buntin, was born in Whitesville, Missouri on October 6, 1937 and passed away in the Cox South Hospital in Springfield, Missouri on Thursday, November 4, 2021. He was at the time of... View Obituary & Service Information

The family of Johnny Ray Buntin created this Life Tributes page to make it easy to share your memories.

Send flowers to the Buntin family.