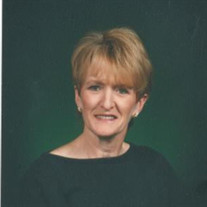 Judith “Judy” (Steinbeck) Richardson, daughter of Arnold and Margaret (Nickum) Steinbeck, was born December 15, 1945, in Springfield, Missouri. She departed this life peacefully at the age of 74 on Monday, March 30th, 2020 with her daughter (Stacy) & sister (Becky) at her bedside. On February 22, 1964, she was united in marriage to Richard (Wayne) Richardson, and to this union one daughter (Stacy) was born. Wayne and Judy were married for approximately 11 years before they divorced but did maintain a good relationship afterward. She was preceded in death by her father (Arnold), mother (Margaret), sister (Nora Ann), and brother (Philip). Judy is survived by her daughter, Stacy Bernard, and her husband, Scott, of Clinton, Missouri; 3 sisters, Nellie Villines, and her husband, Otis, of Louisburg, Missouri; Becky Bolin, of Sparta, Missouri; Lora Mayer, and her husband Ed, of Louisburg, Missouri; and many cousins, nieces, & nephews. She grew up on a farm near Louisburg, Missouri where she enjoyed horseback riding and playing with her siblings and many cousins. She had chores to do which included milking cows and helping to maintain the large family garden. At one time she had a pet cow named Pet. She played basketball while attending Buffalo High School and when not at school, she was a waitress at a local restaurant. Judy worked for approximately 20 years at Zenith Electronics in Springfield, Missouri until the company relocated. She then decided to become a Registered Nurse and celebrated her 50th birthday while attending Burge School of Nursing. After becoming a Registered Nurse, she worked for the Citizens Memorial Hospital Medical/Surgical Unit, Oxford Home Healthcare, and Citizens Memorial Hospice services. She also worked for several years for MODOT. The activities she enjoyed as an adult were horseback riding, bicycling, line dancing, participating in the MS150 Bike Tour, attending church at Calvary Chapel, & hiking with her beloved (and very well-trained) dog Lexcy. Her & Stacy were members of the Southwest Missouri Trail riders for many years. Their summer vacations usually involved going to National Scenic Trail rides near Fort Leonard Wood, Missouri. Judy introduced many friends and relatives to horseback riding and provided them with the opportunity to enjoy horses. For many years she had the largest Purple Martin colony in the state of Missouri and took a lot of pride in caring for these beautiful birds that she provided a yearly summer home. She came from a long line of wonderful cooks and was famous for her delicious deviled eggs, which didn’t last long at the many family dinners. She also made other delicious foods like homemade cashew or sweet and sour chicken from scratch. Volunteer organizations she was involved in were the Dallas County Sherriff’s Posse, Back Country Horsemen of Missouri - Tri-Lakes Chapter and enjoyed volunteering at her churches (Calvary Chapel’s) food bank. For several years she spent a lot of her time outside of work helping an elderly neighbor (Paul Maulin) after his wife passed away. In the Fall of 2009, she was diagnosed with a brain tumor and in January of 2010 she underwent a 14-hour surgery to attempt to remove as much of the tumor as possible. Things did not go exactly as planned and for a couple months after this surgery, it was unclear if she would be able to walk or eat safely again. However, with her very determined spirit and lots of therapy, nursing care, etc. she was able to do both of those things again. However, in the Spring of 2012, for various reasons she again started having neurological issues and, in the Fall of 2012, had to go to a nursing home. She had many challenges for the remainder of her life but due once again to her very determined spirit, she kept “getting back up again.” On March 27th, her daughter was informed that her kidneys were failing and knowing that Judy would not want to go to the hospital or undergo dialysis, she made the decision to start her on Citizens Memorial Hospice care. Her family wants to thank everyone at Colonial Springs Healthcare Center who did so much for her during her time there and especially the compassion the nursing staff showed all of us during the last week of her life. For that we will forever be grateful! Graveside services will be conducted at 2:00 p.m. on Monday, April 6, 2020 in the New Hope Cemetery with Pastor Keith Pyles officiating. In lieu of flowers, the family requests donations be made to the CMH Foundation or the Horses of Hope. Services are under the care and direction of the Cantlon-Otterness & Viets Funeral Home of Buffalo.

Judith &#8220;Judy&#8221; (Steinbeck) Richardson, daughter of Arnold and Margaret (Nickum) Steinbeck, was born December 15, 1945, in Springfield, Missouri. She departed this life peacefully at the age of 74 on Monday, March 30th, 2020 with... View Obituary & Service Information

The family of Judith Eleen Richardson created this Life Tributes page to make it easy to share your memories.

Send flowers to the Richardson family.