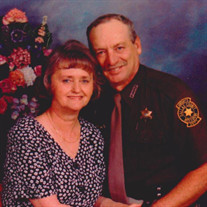 Jeanne Karen (Appleby) Cowden was born on a farm in Bolivar, Missouri on February 1, 1946 to Joe and Ella Mae (Looney) Appleby. She lived there with her parents and three brothers, Pete, Richard, and Randy until they sold the farm in 1956 and moved into town. While living in Bolivar, Joe was called overseas to Saudi Arabia and Kuwait to work. After he returned home, they later moved to Page, Arizona where Joe was working on building a Dam. In 1959 they moved to Louisiana where he worked on an oil refinery. They eventually moved back to Springfield, MO, where they remained. Karen attended Hillcrest High School where she met and later married Larry Cowden. Larry and Karen had 4 sons, all of whom survive her, Jeff, Kevin, Jerry, and Greg. Throughout the years Karen wore many hats. She worked at Pleasant Hope Bank in Pleasant Hope for many years in Customer Service. She and Larry later opened Lucky Corner store at their residence and Cowden Gun and Pawn in Buffalo until they retired. Karen continued to work at the gun and pawn shop until just a few years ago. Both Larry (Papa), and Karen (Nanny) loved sharing their love of the outdoors, guns and hunting with their sons, and introducing that love and passing it on to their grandchildren. After Larry’s death she continued working part time to keep busy at Clara’s Auction House in Buffalo. Karen made some wonderful friends there that have watched over her and helped her the past few years. Karen attended Charity Christian Church in Charity, MO for many years where she acquired many friends that loved her dearly and will miss her being in the congregation on Sundays. Karen leaves in her passing her sons, Jeff Cowden & wife Dianna of Elkland, MO, Kevin Cowden & wife Jennifer of Marshfield, MO, Jerry Cowden of Pleasant Hope, MO, and Greg Cowden of Buffalo, MO; five grandchildren, Jason Johnson, Amanda Nimmo, Joshua Cowden, Stormye Cowden, and Ella Cowden; three great-grandchildren Austin Flippin, Addison Nimmo, and Jayden Nimmo; and two brothers, Richard Appleby & wife Shirley of Cleco, MO and Randy Appleby & wife Marsha of Mansfield, MO. Funeral services will be conducted at 2:00 p.m. on Thursday, March 12, 2020 at the Cantlon Otterness & Viets Funeral Home. Escorts will be Joshua Cowden, Jason Johnson, Austin Flippin, Devon Cramer, Dakota McGuire, and Jason Nimmo. Honorary escorts will be Richard Appleby and Randy Appleby. Interment will be in the Pleasant Hope Cemetery under the care and direction of the Cantlon Otterness & Viets Funeral Home of Buffalo. Visitation will be from 1:00-2:00 p.m. Thursday at the Funeral Home. In lieu of flowers, the family requests donations be made to the American Heart Association.

Jeanne Karen (Appleby) Cowden was born on a farm in Bolivar, Missouri on February 1, 1946 to Joe and Ella Mae (Looney) Appleby. She lived there with her parents and three brothers, Pete, Richard, and Randy until they sold the farm in 1956... View Obituary & Service Information

The family of Mrs. Karen Cowden created this Life Tributes page to make it easy to share your memories.

Jeanne Karen (Appleby) Cowden was born on a farm in Bolivar,...

Send flowers to the Cowden family.