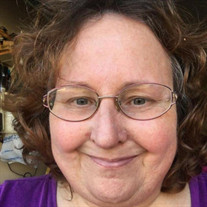 Karin Marie Arey age 61 of Buffalo, Missouri passed away Thursday, December 16, 2021 in the Cox South Hospital Springfield, Missouri. Cremation rites are being accorded by the Cantlon-Otterness & Viets Funeral Home of Buffalo, Missouri. Karin Marie Arey was born February 28th, 1960 to Edward and Juanita Arey on Argentia Naval Base in Newfoundland, Canada. As the daughter of a Navy Seabee, her childhood took her from Brunswick, GA, Pt. Hueneme, CA, Taiwan, and NAS Lemoore, CA. Following her father's retirement, the family moved to Gasville, Arkansas where Karin graduated from Cotter High School in 1978. Following graduation, Karin moved to Fremont , Nebraska with her son, Jon. Karin worked 20 years at Fremont Medical Center. During this time, she met the love of her life, Milton “Dave" Jurgens. They were blessed to spend many years together. In 2001, Karin moved to Buffalo, MO. From that time until her passing, she was employed by Cox Health, primarily working with babies in labor & delivery and neonatal. Karin enjoyed crafting, reading, and spending time snuggling with her dogs, Buffy, Snoopy and Susie. She had deep love and affection for her granddaughter, Brooke, and great- granddaughters, Persephone and Rhea. Photography and scrapbooking were a great enjoyment for Karin. Karin is survived by her son, Jon (Karri), Dell Rapids, SD; fur-baby, Susie; mother, Juanita, Los Lunas, NM; two sisters: Sharon (Scott) Cowan, Los Lunas, NM and Wanda (Steven) Long, Gainesville, MO; 2 nieces and 1 nephew; special Jurgens and Portis families of Buffalo, MO; and Cox co-workers/family in L&D. She was preceded in death by her father, Edward; significant other, Dave; and fur-babies , Buffy and Snoopy and a niece Nita Long. A celebration of life will be held at a future date.

The family of Karin Marie Arey created this Life Tributes page to make it easy to share your memories.

Send flowers to the Arey family.