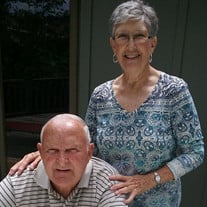 Kenneth “Kenny” Ray McDaniel, son of the late Roma and Ruth (Shembarger) McDaniel, was born on November 27, 1941 in Long Lane, Missouri and departed this life on December 19, 2018. At the time of his passing he was 77 years and 21 days of age. Kenny was reared in the Long Lane, Missouri area and attended grade school at the Pattersonville School. He graduated from Buffalo High School in 1959. He was united in marriage to Evelyn Marsh on March 3, 1963 and to this union one son Danny was born. Kenny was a good man who loved his wife dearly and cherished the time he spent with his son and grandkids. He was an avid outdoorsman and enjoyed fishing, gardening, playing softball, and quail hunting. He worked at Woods Supermarket for 44 years, working his way up to Assistant Manager before retiring in 2003. He loved his job and would often say he was their P. R. Man. Kenny was a very thoughtful and caring person who loved to tease people. Kenny was preceded in death by his parents; his brother, Donnie McDaniel; and his sister, Hazel Larkin. He is survived by his wife Evelyn of the home; his son, Danny and Wanda McDaniel of Camdenton, MO; and two grandchildren, Ethan “Little Stuff” McDaniel and Kelsey “Teen Teen” McDaniel. He also leaves other family members and many friends who will all truly miss him. Funeral services will be conducted at 10:00 a.m. on Saturday, December 22, 2018 at the Cantlon Otterness & Viets Funeral Chapel with Bro. Dennis Skinner and Bro. Dusty Armstrong officiating. Escorts will be Darrell Weeks, Loyd Deckard, Mike Larkin, Robert Zumla, Danny McDaniel, and Ethan McDaniel. Interment will be in the Edmond Powell Cemetery under the direction of the Cantlon Otterness & Viets Funeral Home of Buffalo. Visitation will be from 6:00-8:00 p.m. Friday at the Funeral Home.

The family of Mr. Kenneth Ray McDaniel created this Life Tributes page to make it easy to share your memories.

Send flowers to the McDaniel family.