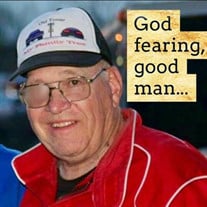 Kenny Lee McDaniel was born on August 7, 1947 in Long Lane, Missouri, the son of Kenneth and Geneva (Stidham) McDaniel. He died on October 13, 2018 after a long illness. He grew up in Long Lane, Missouri and graduated from Buffalo High School in 1965. Kenny was united in marriage to Jeanne (Walker) McDaniel on June 2, 1967 and to this union were born two children, a daughter, Angie (McDaniel) Taylor and a son, Mike McDaniel. He accepted Jesus as his Lord and Savior in 1967 and joined the Cherry Grove Baptist Church where he later served as a Deacon for over thirty years. After working as an auto mechanic at Davies Chevrolet for several years, he became an auto mechanics instructor at the Dallas Count Vo-Tech, now known as the Dallas County Technical Center. For over thirty years he instilled in his students to be a "Productive Product of Society." He continued to be a large supporter of the school and cared deeply for his students. Kenny lived life with a passion and was passionate about everything he did. This passion throughout the years included hunting, trap shooting (where he was Missouri State Champion in 1986) and most recently drag racing. He was inducted into the Southwest Missouri Drag Racing Hall of Fame for 2017 and said in his usual humble manner, "I can't believe they selected me, I never did anything great". He was especially passionate about his family who he loved dearly and was always willing to do anything to help them including getting out in the middle of cold winter nights to go to his mother-in-law's house to fill her wood stove. Most importantly he was passionate about his Lord and Savior and loved his church. Kenny was preceded in death by his parents, Kenneth and Geneva McDaniel and a sister, Janis Dee Jones. He is survived by his wife, Jeanne, of the home; one daughter, Angie (McDaniel) & husband Aaron Taylor; one son Mike McDaniel; one sister, Debbie & husband Gary Eaker; six grandchildren, Nathan Taylor, J.C. Hernandez, Cierra (McDaniel) & husband Dalton Parnosky, Ryann Taylor, Geneva McDaniel and Michael McDaniel; honorary grandson, Tanner Allen; honorary son, Mike Stanton; and sisters-in-law and spouses, nieces, nephews and many friends and former students who will sadly miss him. Funeral service will be conducted at 10:00 a.m. on Tuesday, October 16, 2018 at the Cantlon Otterness & Viets Funeral Home with Rev. Loren Dryer and Rev. David Miller officiating. Pallbearers will be Greg McKinney, Micky Davies, Matt Mashburn, Larry Hunt, Jr., Larry Jones, Darin Newman, and Brian Kramer. Music will be provided by Karli and Abbi Duren and Geneva McDaniel. Interment will be in the Maple Lawn Cemetery under the direction of Cantlon Otterness and Viets Funeral Home of Buffalo. Visitation will be October 15, 2018 from 6:00 to 8:00 p.m. at the funeral home. In lieu of flowers memorials may be made to the Kenny McDaniel Memorial Bench Fund.

The family of Mr. Kenny Lee McDaniel created this Life Tributes page to make it easy to share your memories.

Send flowers to the McDaniel family.