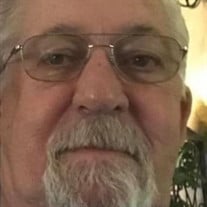 Larry Wayne Hale, Sr. passed away at his Joplin home on August 8, 2020 at the age of 71. Larry was born on July 22, 1949 in Tribune, Kansas to Lynn and Bonnie (Dobbins) Hale. Mr. Hale joined the Navy in 1967 at the age of 18. In 1977, he left the Navy and spent time as a police officer in Rolla, MO, and a park ranger in Bennett Springs, MO before becoming a truck driver. Larry is survived by his wife, Helen of 29 years; one sister, Cheryl Powell; three sons, Larry Hale, Jr., Joseph Hale, and Jason Hale; a step-son, Rodney Woody; a step-daughter, Amanda Woody; a nephew, Adam Powell; and two nieces, Angie Powell Hargrove and Holly Powell Hackett. Larry is also survived by ten grandchildren, two great-grandchildren, four great-nieces, and four great-nephews. Services will be held on August 22, 2020 at 11:00am at the Cantlon-Otterness & Viets Funeral home in Buffalo, Mo. followed by a Military Honor graveside services performed by VFW Galmey Post #9638 at the Maple Lawn Cemetery in Buffalo, MO.

The family of Mr. Larry Wayne Hale Sr. created this Life Tributes page to make it easy to share your memories.

Larry Wayne Hale, Sr. passed away at his Joplin home on August...

Send flowers to the Hale family.