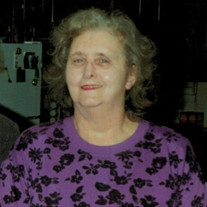 Letha “Frances” (Smith) Maxwell, 88, of Fair Grove, passed away December 25, Christmas day, after a short illness. Frances was born on September 27, 1930 east of Cloverdale in Dallas County, MO to Francis and Iva (Rogers) Smith. Frances was brought up to be very independent. She loved being with her father and spent many hours and days with him as he worked on cars as a mechanic. Frances was the mechanic in her own family when she married, and if she couldn’t fix the problem, she would have the master, her father “Pop” take over. As a young woman, Frances waited tables in restaurants before going to work at Hallmark Cards in Kansas City. Then in 1957 she met and married a young G.I. stationed at Fort Leonard Wood, Joe R. Maxwell. They married later that year, before he left for two years to be stationed in occupied West Germany. Upon his return, they moved to his home state of Virginia, where their son Joe Francis Maxwell was born. Frances joined Beale Memorial Presbyterian Church, where her membership remained the rest of her life. In 1962 the family moved back to Missouri to be close to Frances’ parents. They lived in the Halfway area until 1993, when they moved to Fair Grove and remained in that location thereafter. Frances finished her working career in 2008, retiring after 25 years with Commerce Bank in Springfield. She maintained her friendships with her co-workers throughout the rest of her life. Frances was very talented. She frequently was involved in knitting, crocheting, needlepoint, and quilting. She was a voracious reader and loved nature in all forms. She enjoyed crossword puzzles, picture puzzles, and loved the color purple. She also enjoyed listening to country music from the “gentle giant”, Don Williams. Frances could be summed up with so many noteworthy qualities. She was creative, curious, hard-working, self-reliant, practical-minded, a gifted problem-solver, but the qualities that stood out the most were her kindness to those she came in contact with; her cheerful spirit; and her ready smile and optimism about what life had to offer. Her love for her family was unmatched, and she would go out of her way to compliment, encourage, and let you know how important you were and how much you were loved. You truly felt you were perfect in her eyes, and because of that you tried that much harder to prove her right. In retrospect, Frances was the one that truly was closest to that goal. Frances was preceded in death by her parents, her sisters Reatha (Stockton) and Marie Smith; and her husband Joe R. Maxwell. She is survived by her son Joe F. Maxwell, daughter-in-law Susan (Jess) Maxwell, grandsons Brendan (Jesica) Maxwell, and Kellan (Hannah) Maxwell; granddaughter Caroline Frances Maxwell; great-grandson Silas Joseph Maxwell; Aunt Shirley Jasper, Uncles Jim and Frank Hood, and a special cousin Noel Smith; as well as numerus additional cousins, nieces, nephews, and other family members. To those mourning, be comforted: 1 Corinthians 15:55-57 “O death, where is thy sting? O grave, where is thy victory? The sting of death is sin: and the strength of sin is the law. But thanks be to God, which giveth us the victory through our lord Jesus Christ”. Funeral services will be held at 3:00 p.m. on Sunday, December 30, 2018 at the Cantlon Otterness & Viets Funeral Home with Pastor Selena Freeman officiating. Escorts will be Brendan Maxwell, Kellan Maxwell, Tom Harms, Jeff Weatherly, Tommy Venable, and Oval Revels. Honorary escorts will be Mark Jess, Mike Jess, and Caroline Maxwell. Interment will be in the Maple Lawn Cemetery under the direction of the Cantlon Otterness & Viets Funeral Home of Buffalo. Visitation will be from 2:00-3:00 p.m. Sunday at the Funeral Home. In lieu of flowers, the family requests donations be made to The Well Church.

The family of Mrs. Letha Frances Maxwell created this Life Tributes page to make it easy to share your memories.

Send flowers to the Maxwell family.