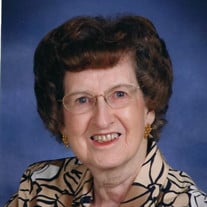 Lila Mae (Macy) Eisman was born on November 17, 1928 in Liscomb, Iowa to Charles and Dorothy (Phipps) Macy and passed away on May 18, 2021. Lila attended elementary school in Iowa until her family moved to Savannah, Missouri in 1941. Lila graduated from high school in Savannah in 1946. Following her graduation, Lila attended Business School in Lincoln, Nebraska. She also attended Phillips University in Enid, Oklahoma for one year. After several years in a career as a Secretary, she met and married Fred Warren Eisman on July 18, 1954 in Buffalo, Missouri and to this union four sons were born: Denny, Greg, Kent, and Brian. Lila joined the Christian Church (Disciples of Christ) at an early age and was baptized by her father who ministered churches in Iowa and Missouri. She was a member of the First Christian Church in Buffalo, Missouri since 1952 and a member of the Christian Women’s Fellowship for fifty plus years. Lila was a Secretary at the Dallas County Farm Bureau for ten years. She was also a church secretary for the First Christian Church for ten years, during the ministry of Bill Longman and several interim ministers. She enjoyed bowling for a number of years and liked to read. Her greatest joy was caring for her family and following the activities of her sons, which included attending numerous ball games! Lila was preceded in death by her husband; her parents; her youngest son, Brian in March 2011; and her sister, Twila Grubb. She is survived by her sons, Denny, Greg, and Kent; seven grandchildren, Amanda, Megan, Ariel, Emily, Macy, Brandon, and Cody; four great-grandchildren, Savannah, Kaylee, Hayden, and Martin; four step-grandchildren, Scott, Tiffany, Lacy, and Danielle; and one sister, Beth Gibbs of Austin, Texas. She also leaves behind several nieces, nephews, and cousins. Funeral services will be held at 2:00 p.m. on Saturday, May 22, 2021 in the Buffalo First Christian Church with the Rev. Tim Case and Rev. Jennifer Long officiating. Interment will be in the Memorial Gardens of Memory Cemetery under the care and direction of the Cantlon-Otterness and Viets Funeral Home of Buffalo, Missouri. Visitation will be from 6:00 to 8:00 pm Friday, May 21, 2021 in the Cantlon-Otterness & Viets Funeral Home in Buffalo, Missouri. In Lieu of flowers memorials may be made to the Christians Women's Fellowship.

Lila Mae (Macy) Eisman was born on November 17, 1928 in Liscomb, Iowa to Charles and Dorothy (Phipps) Macy and passed away on May 18, 2021. Lila attended elementary school in Iowa until her family moved to Savannah, Missouri in 1941. Lila... View Obituary & Service Information

The family of Lila Mae Eisman created this Life Tributes page to make it easy to share your memories.

Send flowers to the Eisman family.