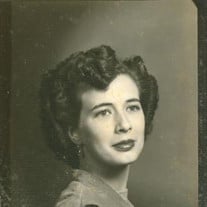 Lillian Louise (Williams) Garrison was born July 17, 1934 at the Thompson Place near Berryville, Ar. In her early years she attended elementary school in Arkansas, but later attended Carter School outside Louisburg as a teenager, due to her family returning to their roots in Polk and Dallas Counties. After graduation from Louisburg High School, she moved to live with her brother and sister-in-law, Shirley and Georgia in Berryville. While working in her brother’s store, she saw for the first time her future husband Ed Garrison. Later, on a double date, at the close of the evening Louise’s date did not want to walk her to the door upon arrival to her residence. Ed politely offered to walk her to the door! This began their path to marriage, which took place December 25th, 1952. They were blessed to have 32 years of marriage, which suddenly ended at Edward’s unexpected death in a trucking accident 1984. They were blessed with 3 children Martin, Anita, and Teresa. Early in her marriage to Edward, she worked outside the home at her brother Archie’s gas station and cafe in Louisburg. In 1963 Ed and Louise created “Mr. Ed’s” of Urbana, which still thrives today. After several years of hard work they decided to sell in 1970. Louise continued her independent spirit creating “Lou’s Place” a sandwich shop. After 2 years she went to work at the “Victorian Steakhouse. She concluded her work outside the home by working at the “Williams Brothers” grocery store of Louisburg. Louise was known for her cooking! Favorite dishes over the years included her broccoli rice casserole, green beans, potato salad, pecan pie, raisin pie, sheath cake and banana bread. All of her pies were made from scratch, no store bought pie crust was allowed. She learned to cook on a wood stove under the supervision of mother Dessie. Through the years, she made many batches of fudge candy as well as molasses cookies during the Christmas season. Her brothers had great affection for these made from scratch treats! Over the years it became a tradition to stock up with food as one headed home! Louise knew the favorites for each household and she made sure there was plenty for all! Louise loved her immediate and extended family. Reunions brought her joy! Decoration day was important because it was a day to enjoy her family and to honor those who had passed on. Louise accepted Christ as her Lord and Savior as a teenager which was followed in believer’s baptism in Lindley Creek. She was a long time member of the 1st Baptist Church of Louisburg. Louise peacefully stepped through the doorway to enter eternity on September 29th, 2021 about four o’clock surrounded by family. She was preceded in death by her husband Edward Garrison, parents Lewis and Dessie (Condren) Williams, brothers Glenn, Archie, Shirley, Arthur, Hubert and Dale. She is survived by Marty and Susie Garrison of Bolivar, Bob and Anita Phillips of Louisburg, and Dale and Teresa Brown of Nixa. She has been blessed with 9 grandchildren and 16 greatgrandchildren along with many nieces and nephews in Missouri and Arkansas. Funeral services will be at 2:00 p.m. Monday, October 4, 2021 in the Cantlon-Otterness & Viets Funeral Home in Buffalo, Missouri. Visitation will be from 1:00 to 2:00 p.m. Monday, October 4, 2021.

Lillian Louise (Williams) Garrison was born July 17, 1934 at the Thompson Place near Berryville, Ar. In her early years she attended elementary school in Arkansas, but later attended Carter School outside Louisburg as a teenager, due to her... View Obituary & Service Information

The family of Lillian Louise Garrison created this Life Tributes page to make it easy to share your memories.

Send flowers to the Garrison family.