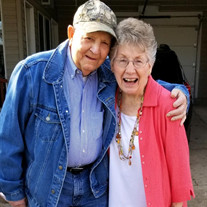 Loren Dale Dill was born on July 6, 1933 near March, MO, the son of Oscar and Lettie Stafford Dill. He departed this earth on June 21, 2019, 15 days shy of his 86th birthday. Reared on the family farm, Dale attended Flint Ridge grade School and graduated from Buffalo High School in 1951. Following graduation, Dale was drafted into the United States Army and served two years during the Korean Conflict Era. Shortly following his release from the military, Dale began a courtship with Kathleen Henderson and a romance developed that lasted for the rest of his life. Dale and Kathleen Henderson were married on May 11, 1956. Following their marriage, Dale and Kathleen moved to Kansas City, Kansas where Dale worked for General Electric. They purchased a farm south of Buffalo and moved home in March 1963. For the rest of his working career and into retirement, Dale worked as a farmer and dairyman. Dale loved baseball and followed the Cardinals throughout his life. He loved his church and he was a member of Center Point Southern Baptist Church before moving to First Baptist Church in Buffalo where he remained a member until his death. Family was always Dale and Kathleen’s first priority. Dale coached and followed his boys as they grew up. He was a devoted father and as he aged, he became a phenomenal Grandfather. Dale was preceded in death by his parents; three sisters, Phyllis Sweaney, Wilma Richardson, and Pansy Cyrus; and his brother Leon. He is survived by his wife Kathleen of the home; his five children, Joyce & husband Bill Cahow of Elkland, MO; Charlie & wife Dixie of Elkland, MO; Jeff of Plantation, FL; Gary of White Plains, NY; and Michael of Franklin, PA; 11 grandchildren; 12 great-grandchildren; one sister, Betty & husband Bob Howerton of Buffalo, MO; two former daughters-in-law, Judy Charlton of Springfield, MO and Cheryle Dill of Camdenton, MO. Cheryle blessed the family as one of Dale’s primary caregivers in his last days. Dale also leaves behind his prize team of horses, Dick and Ned, and his beloved dog, Tommy. Funeral services will be conducted at 2:00 p.m. on Wednesday, June 26, 2019 at the Cantlon Otterness & Viets Funeral Home with Bro. Gary Dill and Bro. Jeff Dill officiating. Escorts will be Josh Cahow, Jared Cahow, Travis Dill, Tyler Dill, Stuart Dill, Ashley Russell, and Adam Dill. Interment will be in the Center Point Cemetery under the care and direction of the Cantlon Otterness & Viets Funeral Home of Buffalo. Visitation will be from 12:30-2:00 p.m. Wednesday at the Funeral Home. In lieu of flowers, the family requests donations be made to the Center Point Cemetery Fund.

The family of Mr. Loren Dale Dill created this Life Tributes page to make it easy to share your memories.