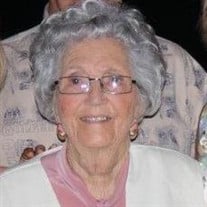 Loreta Mae “Collier” Giberson was born July 30, 1923 at home, in the Sandhills of Cherry County, Nebraska where her parents were homesteading. She died July 12, 2019, at Memorial Healthcare Facility, Bolivar, MO at the age of 95 years, 11 months and 12 days. Loreta was the youngest child of George A and Myrtle Anna “Brannon” Collier. Loreta had five siblings, Kermit, Sylvan, Nila, Wayne and Laurence. Loreta was born and raised in the Sandhills of western Nebraska where she went to high school at Dunning, Nebraska. While in high school she met Harold M Giberson, where they participated in band and glee club. Th ey were united in marriage on Jan. 27, 1940 in Dunning, Neb. When her husband Harold, volunteered for the U.S.Army during WW II, the family living in Fremont, Neb moved to Texas for basic training and then Loreta lived with her parents in Dunning, Nebraska. After the War the family moved to the Collier family ranch where they ranched and raised their family. Loreta and Harold helped organize the VFW (Veterans of Foreign Wars) Post in Dunning and Loreta became the Nebraska State President of the VFW Auxiliary in 1953-54. In 1955 the family moved to a farm in Urbana, MO. Loreta was involved in the community and the family was chosen as Dallas County Family of the Year by the Missouri Extension Service. Loreta opened and ran the Urbana Arts & Knit Shop, helped start the Jolly Janes Service Club and enjoyed the Pond Club. Loreta was successful in her Jewelry and Cosmetic business, traveling throughout MO. Loreta was active in the Prairie Chapel UMC, serving as United Methodist Women president and other offices. Loreta sang in and led the choir for many years. Loreta, a devoted mother, was known by her family as being a great cook and the family so enjoyed the many years of gatherings at the ranch, the farm and her home for the holidays and celebrations. As a mom, grandma and great grandma, Loreta instilled in her family the values of hard work, being responsible and “doing your best” in all things. Loreta had a strong Christian faith, loved music, her dogs, visiting with friends and volunteering at church. Loreta loved music and in her last days sang along with old time hymns including “I’ll Fly Away”. She let her family know she was “ready to go” even though her family was not quite as ready to let her go. Loreta was preceded in death by her parents, her husband Harold, and her siblings. Loreta leaves, to cherish her memory, her son Nelson Giberson and Martha, Bolivar, MO, daughters, Nila Spencer Cleaves and Craig, Loch Lloyd, MO, Karon Spencer and Jim, Parkville, MO, Leila DeMayo, The Villages, FL., nine grandchildren, 15 great grandchildren, one great great grandchild, many nieces, nephews, cousins, a sister-in-law and friends. Pallbearers are Kevin Spencer, Jason Edge, Blake Spencer (grandsons), Terry Frolio (nephew), Carl Bailey, Dale Settle.,Bill Vaughn and Kendall Eidson. Honorary Pallbearers are Jim Spencer and Craig Cleaves (sons-in-law), Dan Curtis, Larry Collier, Walter Collier and Jim Fluckey (nephews). Rev Jeff Cole, Prairie Chapel United Methodist Church, officiating with music by Carla Moore. For Memorial Donations, the family named Prairie Chapel UMC, RR 1, Box 839, Urbana, MO 65767. Burial will be in Bowers Chapel Services are at 2:00P Tuesday, July 16 at Cantlon Otterness Funeral Chapel at Urbana, MO. Visitation is at 1:00P before the service. An attendant will be there on Monday. Service under the direction of Cantlon Otterness & Viets Funeral Home.

Loreta Mae &#8220;Collier&#8221; Giberson was born July 30, 1923 at home, in the Sandhills of Cherry County, Nebraska where her parents were homesteading. She died July 12, 2019, at Memorial Healthcare Facility, Bolivar, MO at the age of 95... View Obituary & Service Information

The family of Mrs. Loreta Mae Giberson created this Life Tributes page to make it easy to share your memories.

Send flowers to the Giberson family.