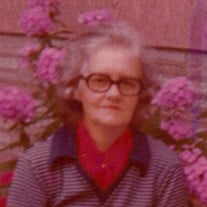 Mamie Ethel Scrivener, daughter of William Lacy and Bessie (Guthrie) Wise, was born March 10, 1923 at Corkery, MO. She departed this life on March 3, 2019, at Colonial Springs Healthcare Center in Buffalo, MO. As a child she would spend time with her grandparents, Mandy and Jerry Wise. She attended grade school at a one room schoolhouse. When not at her grandparents or in school, Mamie helped her mother care for her brothers and sisters. Later in her teenage years she met and married Cecil Scrivener, on September 17th, 1939. To this union nine children were born. Early in their marriage they lived a few years in the state of Washington. After returning to Missouri they eventually made their home near Plad and Bennett Springs. While raising their family, Mamie worked at Rice Stix and H.D. Lee, in Lebanon, for a couple of years. Mamie enjoyed sewing clothes and making quilts for her family. Taking care of the garden, growing flowers and spending time with family, especially her grandkids. She would make cards every year for her grandkid’s birthdays, enjoyed board games with them and making Christmas candy and cookies. When Cecil died suddenly in 1974, Mamie continued raising the family and taking care of the home. Mamie read her bible every day. No matter what happened throughout her life her faith in God helped her to stay positive. Even after she suffered a stroke in her early 60’s. Mamie’s faith never faltered. She attended Bailey Chapel Freewill Baptist Church well over 30 years, rarely missing a Sunday service. She continued to read her bible and weekly Sunday school lessons at home after she could no longer attend because of health reasons. She was a devoted wife, mother, grandmother, and friend. She will be missed by everyone who knew her. Mamie was preceded in death by her grandparents and parents. Her husband, Cecil; four sons, Larry Dale, Carl Ray (Lucky), Stanley Warren and Jerry Dean; four brothers Roy, Raymond, Robert, and Eldon Ray; four sisters, Myrtle, Minnie, Mildred, and Bonnie. She is survived by two sons, Kent Scrivener of Tunas, MO and Steve Scrivener & his wife Pearl from Tunas, MO; three daughters, Sue Hawkins & husband Eddie of Tunas, Debbie Scurlock & husband Larry, SPFD, and Norma Faulkner of Tunas; twelve grandchildren; and 24 great-grandkids. Funeral services will be conducted at 10:00 a.m. on Thursday, March 7, 2019 at the Cantlon Otterness & Viets Chapel with Bro. Dean Davis officiating. Escorts will be Devin Owens, Brandon Case, Keith Whipple, Daccota Scrivener, Airric Atkisson and Victor Gargus. Honorary escorts will be Aaron Johnson, Tim Ratsch, David Meadley, and Bobby Cain. Music will be provided by Carla Cain and Angela Hawkins. Interment will be in the Plad Cemetery under the direction of the Cantlon Otterness & Viets Funeral Home of Buffalo. Visitation will be from 9:00-10:00 a.m. Thursday at the Funeral Home. In lieu of flowers, the family requests donations be made to the Bailey Chapel Freewill Baptist Church. Condolences and online register book entries may be left at www.cantlonotterness.com.

Mamie Ethel Scrivener, daughter of William Lacy and Bessie (Guthrie) Wise, was born March 10, 1923 at Corkery, MO. She departed this life on March 3, 2019, at Colonial Springs Healthcare Center in Buffalo, MO. As a child she would... View Obituary & Service Information

The family of Mrs. Mamie Ethel Scrivener created this Life Tributes page to make it easy to share your memories.

Send flowers to the Scrivener family.