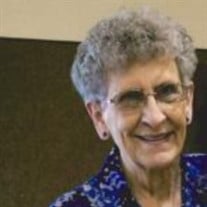 Marsha Lou Thomas, daughter of the late Crawford Clayton and Goldie Lena (Lindsey) Jackson, was born on August 9, 1943 in Grandfield, OK and departed this life on January 1, 2022 in Lebanon, MO. At the time of her passing she was 78 years, four months, and 21 days of age. Marsha attended school in Dill City and Hinton, and graduated from Grandfield High School in 1961. She attended Southwestern Oklahoma State College and graduated with a BA in Art Education and received her Oklahoma Teacher’s Certificate in 1965. She married Rex Akers in 1964, but later divorced. She taught art and history at Clinton High School in Clinton, OK from 1965-1967 before moving to Gainesville, TX. She later moved to Ft. Worth, TX in 1970 to work as a commercial artist for three years. Marsha was united in marriage to Joe Thomas on April 11, 1971. Joe was a US Army recruiter at the time of their marriage. Marsha enlisted in the Army on Sept. 10, 1973. While in the army, they served together for two three-year tours in Germany, two years at Ft. Dix, NJ, and six months at Ft. Hood, TX. Marsha attained the rank of Staff Sergeant. Her medals include the Army Commendation Medal with oak leaf cluster, National Defense Service Medal, and the Overseas Medal with numeral two. She spent the last six years as a training NCO, teaching a new personnel system to both enlisted and officer ranks. She also worked with the 5th Corps Inspector General during the last three years in Germany doing inspections at installations all over the 5th Corps area and at Ft. Hood, where she was a member of the 1st Cavalry Division. Marsha left the Army after 8 ½ years of service. Marsha and Joe moved to Palestine, TX in 1983, where Joe worked for the Texas Department of Corrections. Marsha went back to college at the University of Texas at Tyler, where she studied English and received her Texas Teacher’s Certificate. She taught at Palestine Middle School until they moved to the Amarillo area in 1987. In March of 1991, they moved to the Panhandle of Texas, where they worked for the Texas Department of Criminal Justice at the William P. Clements Unit in Amarillo. Joe was a corrections officer, and Marsha was a teacher. They transferred to the Rufus Jordan Unit in Pampa when it opened, and retired from there, Joe in 2002 and Marsha in 2003. Marsha was preceded in death by her parents; two brothers, Keith Jackson and Dennis Jackson; grandson, Robb DeMarr; and son-in-law, Tony DeMarr. She is survived by her husband Joe of the home; daughters, Jana & husband Scott Taylor of Colleyville, TX and Amy Akers of Rhome, TX; step-daughter, Tammy & husband Chester Hill of Buffalo, MO; step-son, Todd & wife Mary McGregor of Clever, MO; nine granddaughters, two grandsons; six great-grandchildren; one sister, Judith & husband Jerry Murray of Centerview, MO; one brother-in-law, Dan & wife Cathy Thomas of Anna, TX; and numerous nieces, and nephews, as well as many cousins and countless friends. In lieu of flowers, the family requests donations be made to the National Multiple Sclerosis Society (NMSS), Panhandle Division, 6222 Canyon Dr., Amarillo, Tx 79109 or the Multiple Sclerosis Association of America, South-Central Regional Office, 13410 Preston Rd., Dallas, TX 75240.

Marsha Lou Thomas, daughter of the late Crawford Clayton and Goldie Lena (Lindsey) Jackson, was born on August 9, 1943 in Grandfield, OK and departed this life on January 1, 2022 in Lebanon, MO. At the time of her passing she was 78 years,... View Obituary & Service Information

The family of Marsha Lou Thomas created this Life Tributes page to make it easy to share your memories.

Marsha Lou Thomas, daughter of the late Crawford Clayton and...

Send flowers to the Thomas family.