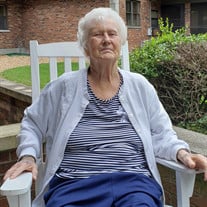 Martha Ella Bricker, daughter of the late Albert Levi and Anna Pearl (Clymore) Williams, was born June 1, 1943 in Urbana, MO and departed this life on September 14, 2019 in Bolivar, MO. At the time of her passing she was 76 years, 3 months, and 13 days of age. On March 8, 1964 she was united in marriage to Duane Alan Bricker, and to this union two sons were born. Martha was preceded in death by her husband Duane Alan Bricker in 2005, her parents, one son John Arthur Bricker, four brothers, Glen Williams, Robert Williams, Buddy Williams, and Louis Williams; and two sisters, Helen Hooper and Dorothy McCain. Martha was also preceded in death by four nieces, Jeanie LaBarre, Debbie Sheldon, Shelly Rantz and Sara Meyers, and three nephews, Mark Williams, David Williams and Bryan Williams. Martha is survived by her son Gregory Alan Bricker of Eudora, KS, and four grandchildren, Ashley Nicole Bricker of Lawrence, KS, Michael Alan Bricker of Lawrence, KS, Cameron Patrick Lee Bricker of Eudora, KS, and Brandon Ray Wiggins of Desoto, KS. Martha is also survived by two brothers, Bob and wife Virginia Williams, of Liberty, MO, and Lawrence and wife Joyce Williams of Lebanon, MO, a number of nieces and nephews as well as a host of other relatives and many friends. She was born and raised in Urbana, MO and never strayed far from home. She was the “baby” of the family and quickly learned to hold her own against her older brothers. She and Duane lived for a time in Bethany, MO where they lovingly raised their son Greg. They also lived in Clinton, MO and Eldon, MO where Duane worked for the U.S. Government as a district manager for the Farmers Home Administration. After Duane retired, they moved to Preston, MO and made their home on their farm. Martha worked alongside Duane and loved her livestock, especially her cattle. She enjoyed growing a garden every year and liked sharing her produce with family and friends. She also enjoyed fishing, playing golf, going to the casino, playing cards, and visiting family and friends. Martha was a unique, one of a kind woman with a quick wit and kind heart who loved to tell stories and jokes. She was a loving wife, mother, grandmother, sister, aunt and caring neighbor and friend. We celebrate her life and her accomplishments, and know that she will never be forgotten but greatly missed. A Celebration of Life will be held Wednesday, October 9, 2019 from 3:00 to 6:00 p.m. at the Weathered Wisdom Barn in Preston, Missouri.

Martha Ella Bricker, daughter of the late Albert Levi and Anna Pearl (Clymore) Williams, was born June 1, 1943 in Urbana, MO and departed this life on September 14, 2019 in Bolivar, MO. At the time of her passing she was 76 years, 3 months,... View Obituary & Service Information

The family of Mrs. Martha Ella Bricker created this Life Tributes page to make it easy to share your memories.

Send flowers to the Bricker family.