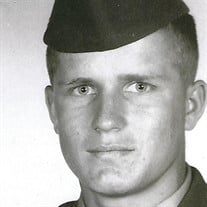 Marvin Wayne Rice, son of the late Otto and Dovie (Pruett) Rice was born on January 29, 1941 in New Offenberg, MO and departed this life on November 3, 2020 in Buffalo, MO. At the time of his passing he was 79 years, nine months, and three days of age. Marvin or “Snapp” as his family and friends called him, graduated from Buffalo High School in 1958, and shortly after enlisted in the United States Army. After his time in the service, he had various jobs in several states. He started his own food concession business in 1992, and worked at many county fairs, picnics, and art and craft festivals. He sold the business and retired in 2014. Marvin enjoyed going to the lake and attending car races or watching them on TV. He also enjoyed traveling with his brothers delivering birds, having family gatherings, and especially spending time with his three grandchildren and son and daughter-in-law. Marvin was preceded in death by his parents; four brothers, Otto Rice, Jr., Gerald (Pete) Rice, Elmer Rice, and Gary Rice; and two sisters, Wanda Holman and Linda Kay. He is survived by on son, Clay & wife Betty Rice of Florida; two brothers, Frank & wife Sharon Rice of Buffalo, MO and Danny & wife Brenda Rice of Buffalo, MO; one sister, Judy Long of Buffalo, MO; and three grandchildren, Caleb, Joshua, and Hanna. He also leaves other family members and many friends who will all truly miss him. Graveside services will be held at 2:00 p.m. on Friday, November 6, 2020 in the Memorial Gardens of Memory Cemetery with Bro. Dennis Skinner officiating. Escorts will be Scott Rice, Reggie Rice, Jason Sprague, Jason Rice, Chase Mitchell, Billy Rice, Donnie Rice, and Mike Holman. Honorary escorts will be Jim Piper and Warren Owens. Services are under the care and direction of the Cantlon-Otterness & Viets Funeral Home of Buffalo.

Marvin Wayne Rice, son of the late Otto and Dovie (Pruett) Rice was born on January 29, 1941 in New Offenberg, MO and departed this life on November 3, 2020 in Buffalo, MO. At the time of his passing he was 79 years, nine months, and three... View Obituary & Service Information

The family of Marvin Wayne "Snapp" Rice created this Life Tributes page to make it easy to share your memories.

Send flowers to the Rice family.