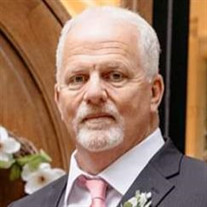 Max Douglas Trader was born at St. Joseph Hospital in Kansas City, MO January 10, 1963, and went home to his Savior on January 19, 2020 after battling a long illness. He lived during his childhood in Raytown, Missouri, and attended Raytown High School, where he played baseball and football and made many lifelong friends. He was baptized at Sni-A-Bar Christian Church in Kansas City at a young age. He, along with most of his family worked at various times for Hallmark Cards. After graduating from RHS in 1981, he moved to Louisburg, MO and worked at Woods Supermarket. Feeling the need for more, he enlisted with the United States Marine Corps in 1983. On the day of his mother’s birthday, his family wished him well as he flew from KCI to Camp Pendleton, CA. Max proudly graduated boot camp and was quickly promoted to Lance Corporal. After serving in Korea and Okinawa, he returned stateside and was honorably discharged in April 1986. It was during his final leave that he met Melissa, and two years later they were wed on June 4, 1988. They were blessed with two children, a son, Douglas Thomas, and a daughter, Jacqueline Elizabeth. Max enjoyed sports, followed the Kansas City Royals and was a lifelong KC Chiefs fan. He worked to earn his Associate of Science in Heating, Refrigeration and Air Conditioning, and graduated from Ozarks Technical Community College in May 2014. His dedication as an employee with Melton Trucking, Mallory Elementary, Dallas County Career Center, and finally as an HVAC technician with Ozarks Technical Community College, where he retired, was admired and appreciated. He enjoyed hunting and being in nature. His greatest joy, however, was family. The pride and love he felt toward his parents, siblings and children were made obvious daily. This was magnified exponentially in his love for his grandchildren, Daylen and Kaylee. “Papa” was always ready to spend time playing, at the pool, reading or watching movies with them. Max renewed his relationship with and accepted the Grace of Christ as his Savior. He was preceded in death by his mother, Hulda Dee (Forth) Trader. He is survived by his wife, Melissa (Wilkerson) Trader of the home, son Douglas Trader and wife, Elizabeth of Springfield, daughter Jacqueline (Trader) Courtney and husband James and children Daylen and Kaylee, of Nixa, his father, William D. Trader and wife Jodi of Springfield, his brothers, Mark Trader and wife Donna, and Michael Trader and wife Karen, both couples of Miramar Beach, FL, sister Marilyn Eidson and husband Clint, of Springfield, as well as numerous nieces, nephews, and cousins, and multitudes of friends. Funeral Service will be 1:00 p.m. Sunday, January 26, 2020 in the Cantlon Otterness & Viets Funeral Home with Rev. Jeff Cole Officiating. Pallbearers will be Brad Jones, Stewart Sherrow, Mark Trader, Mike Trader, Phillip Eidson, Bradley Trader, Clint Eidson, and Todd McGregor. Honorary Pallbearer will be Mike Smith. Cremation rites will be accorded after by the Cantlon Otterness & Viets Funeral Home of Buffalo. In lieu of flowers memorials can be made to The Fisher House in St. Louis or the Veterans Success Fund at OTC.

Max Douglas Trader was born at St. Joseph Hospital in Kansas City, MO January 10, 1963, and went home to his Savior on January 19, 2020 after battling a long illness. He lived during his childhood in Raytown, Missouri, and attended Raytown... View Obituary & Service Information

The family of Mr. Max Douglas Trader created this Life Tributes page to make it easy to share your memories.

Send flowers to the Trader family.