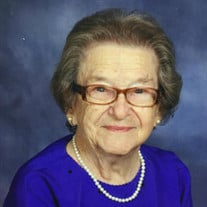 Melba Mae West Harmon, daughter of the late Lonnie and Winnie (Smith) Coggins was born on February 21, 1920 in Leadmine, Missouri and passed away at home on September 21, 2020 at the age of 100 years and seven months. Melba was one of three daughters: Helen, Lucille, and Melba. Helen and Melba started school together at the Hickory Hills one room school when Helen was 6 years old and Melba was 4. Helen had to walk two miles to school, and she said she was not going without Melba, so she started at the age of four. She graduated from Buffalo High School and Melba went on to teach at Gammon School. She met her husband Lee West while attending school at Tunas where he was her bus driver. They were united in marriage on November 8, 1937 and made their home in Leadmine. They had four children: Millie, Bill, Steven, and Tony who loved them dearly. After Lee’s passing in 1994, Melba was later married to Roscoe Harmon who was in her grade in school. They shared many good times traveling and playing cards with friends. They shared almost 15 years before his passing. Melba was a wonderful Christian woman who surrendered her soul to Jesus at an early age and served him with a lifetime of Faithful service. Melba was preceded in death by her husband, Lee West; her parents, Lonnie and Winnie Coggins; her husband, Roscoe Harmon; and one sister, Helen Madden. She is survived by one daughter, Millie Reynolds & husband Robert of Bolivar, MO; three sons, Bill West & wife Gail of Hurricane Mills TN, Steve West & wife Alicia of Windyville, MO, and Tony West & wife Michelle of Centerville TN; one sister, Lucille Newhouse of Pryor, Oklahoma; and a host of grandchildren, great-grandchildren, and great-great-grandchildren. She also leaves other family members and many friends who will all truly miss her. Funeral services will be conducted at 11:00 a.m. on Thursday, September 24, 2020 in the Cantlon-Otterness & Viets Funeral Home with Bro. Ken Morris officiating. Escorts will be Cody West, Brock West, Andy Porter, John West, Randy Oakes, and Kevin Oakes. Music will be provided by Cody West. Interment will be in the Maple Lawn Cemetery under the care and direction of the Cantlon-Otterness & Viets Funeral Home of Buffalo. Visitation will be from 10:00-11:00 a.m. Thursday at the Funeral Home. In lieu of flowers, the family requests donations be made to the Pleasant Hill Cemetery Fund.

Melba Mae West Harmon, daughter of the late Lonnie and Winnie (Smith) Coggins was born on February 21, 1920 in Leadmine, Missouri and passed away at home on September 21, 2020 at the age of 100 years and seven months. Melba was one... View Obituary & Service Information

The family of Melba Mae West Harmon created this Life Tributes page to make it easy to share your memories.