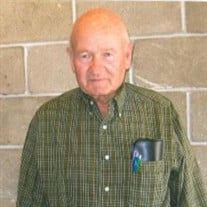 Merl Welch was born on July 8, 1929 in the family home in Edinburg, Illinois to Merl and Meda (Kelley) Welch. An older sister, Fern, and a younger brother, Glenn were part of this family as well. In June of 1946, Merl, and three local boys joined the Marine Corps. The three boys eventually went to the Panama Canal, but Merl went to Oceanside, California for Radio School. He was stationed in Guam and then returned to San Diego and Coronado California where he was part of training troops in the Amphibious Landing Troop Training Unit from 1947 to 1949. Merl married Janet Weiser of Edinburg, Illinois on February 2, 1947. They had five children, Cheri (Dave) Culbertson, Kathi (Steve) Schilling, Brad (Crystal), David (Ayten), and Mike (Brenda). In 1949 he found a job working for the Blount Brothers at a grain elevator in Sharpsburg, Illinois, south of Edinburg. He successfully learned the grain business, and for the next 30 years he and at first his brother Glenn, then later his oldest son Brad and his son-in-law, Steve Schilling, ran three of the four grain elevators that he owned in central Illinois. In the late 1970’s, Merl purchased a cattle ranch Northwest of Urbana, Missouri, and permanently moved there in 1981. Raising cattle ended up being the love of his life, and he was very successful raising champion Shorthorn heifers and bulls. In September of 1987, Merl married Eileen Mabary of Urbana. She brought to the marriage four sons: Dale, Danny, Jerald, and Darryl. Merl was preceded in death by his wife, Eileen; his parents; and his brother, Glenn. He is survived by his sister, Fern; his first wife, Janet; his children and stepchildren; and many grandchildren and great-grandchildren. Funeral services will be conducted at 11:00 a.m. on Monday, March 23, 2020 at the Cantlon-Otterness & Viets Chapel in Urbana. Visitation will be from 10:00-11:00 a.m. Monday at the Funeral Home. Interment will be in the Bower Chapel Cemetery under the care and direction of the Cantlon-Otterness & Viets Funeral Home of Urbana.

Merl Welch was born on July 8, 1929 in the family home in Edinburg, Illinois to Merl and Meda (Kelley) Welch. An older sister, Fern, and a younger brother, Glenn were part of this family as well. In June of 1946, Merl, and three local... View Obituary & Service Information

The family of Mr. Merl Lavern Welch created this Life Tributes page to make it easy to share your memories.

Send flowers to the Welch family.