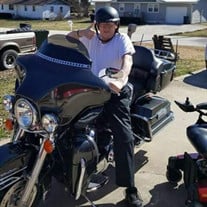 Morris Dale McGregor, son of the late Lestle and Esther Birdie (Mabry) McGregor was born on September 27, 1941 in Alabama, and departed this life on March 25, 2021 at his home in Buffalo, MO. At the time of his passing he was 79 years, five months, and 28 days. Morris was born in Alabama and moved with his family to Fort Worth, TX at the age of four. He worked at a local Drug Store making deliveries on his bicycle. He enlisted in the United States Army when he was 17 and proudly served his country. He was united in marriage to Norma Harrison on April 10, 1971. They moved to Buffalo, MO and he began working as a Police Officer for the City of Buffalo and later a Chief Deputy Sherriff for Dallas County under Jerry Cox. After his time in law enforcement, he went to work for Prime Trucking and later Tracker hauling boats and oversize house boats. He drove for over two million miles without an accident. After his retirement, he enjoyed spending time with his children and grandchildren. He loved going to their ball games and spending time at the lake. Morris was a member of the Calvary Chapel Freewill Baptist Church, the Masons Riddick Lodge 361, and the Shriners. Morris was preceded in death by his parents; two brothers, James and Charles; two sisters, Patsy and Peggy; and one grandson, Robb DeMarr. He is survived by his wife of nearly 50 years, Norma; one son, Todd & wife Mary McGregor of Clever, MO; three daughters, Tammy DeMarr of Buffalo, MO, Teresa & husband Jeff Lankford of Strafford, MO, and Traci McGregor-Hamlet of Buffalo, MO; two bonus daughters, niece Terri Hull-Lugenheim and Traci Mayfield-Owens; one brother, Paul & wife Angela McGregor of Lubbock, TX; eleven grandchildren, Matthew DeMarr, Derek Lankford, Kayla Copher, Morgan Woods, Sara Barrett, Abby Gonzalez, Gavin Lankford, Brock Hamlet, Macy McGregor, Braden McGregor, and Brenden McGregor; and 11 great-grandchildren, Lynlie, Kael, Waylon, Gunner, Kaisley, Easton, Finlee, Mila, Kreed, Leighton, and Brisley. He also leaves other family members and many friends who will all truly miss him. Funeral services will be conducted at 1:00 p.m. on Monday, March 29, 2021 at the Calvary Chapel Freewill Baptist Church with Dr. Douglas Earls officiating. Escorts will be Matt DeMarr, Derek Lankford, Gavin Lankford, Brock Hamlet, Braden McGregor, Brenden McGregor, Austin Woods, James Barrett, and Kaleb Kopher. Honorary escorts will be Grady Buttry, Mark Buttry, Brian Buttry, Marty Cox, David Cox, Brent Hamlet, and Jeff Lankford. Interment will be in the Maple Lawn Cemetery under the care and direction of the Cantlon-Otterness & Viets Funeral Home of Buffalo. Visitation will be from 6:00-8:00 p.m. Sunday at the Funeral Home. In lieu of flowers, the family requests donations be made to the Buffalo Sports Fund.

Morris Dale McGregor, son of the late Lestle and Esther Birdie (Mabry) McGregor was born on September 27, 1941 in Alabama, and departed this life on March 25, 2021 at his home in Buffalo, MO. At the time of his passing he was 79 years,... View Obituary & Service Information

The family of Morris Dale McGregor created this Life Tributes page to make it easy to share your memories.

Send flowers to the McGregor family.