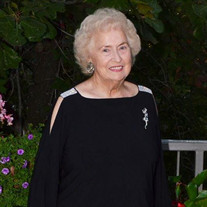 Myra Jane Shewmaker Hale, daughter of the late Blaine and Inez (Sadler) Shewmaker was born on August 28, 1934 in Buffalo, Missouri and departed this life on September 29, 2019 in Springfield, Missouri. At the time of her passing Jane was 85 years, 1 month and 1 day. Jane was raised in Buffalo, MO and graduated from Buffalo High School, a proud member of the “Class of 1952”. Jane attended Southwest Missouri State University. She was united in marriage to Robert Dean “Bob” Hale on August 22, 1952 and to this union was born four sons. Jane was preceded in death by her parents, her brother Rex Shewmaker and her husband, Bob of 51 years. Jane is survived by four sons, Rick Hale of Buffalo, MO, Reggie Hale and wife Gai of Bentonville, AR, Mitch Hale and wife Kerrie of Buffalo, MO and Lucas Hale of Buffalo, MO. Rick has three sons, Blaine, Nathan and Zach. Reggie and Gai have two sons, Chase and Colby and a daughter Cali Sharp. Mitch has two sons, Nickolas and Austin (AJ) and a daughter, Chayla Hughes. Lucas has one son Jacob. Reggie’s son Chase and wife Jeanne have one son Easton, two daughters, Atleigh and Izzy and 1 baby on the way. Reggie’s son Colby and wife Lacee are expecting a child. Reggie’s daughter, Cali and husband Ty Sharp have three daughters, Allie, Ellie and Laney and a son on the way. Mitch’s daughter Chayla and Husband Lucas Hughes, have two children, Landri and Colter. Jane is also survived by her sister in law Joan Shewmaker and her brother in law, Bill Hale and wife Georgia. She is also survived by many nieces and nephews and a host of other relatives and many friends. Jane grew up in Buffalo, Missouri on a farm and her family later moved into the town of Buffalo where her family started Shewmaker Auto Parts. Little Janie Shewmaker’s 1st job was selling door to door “Fashion Frocks,” which explains her later life entrepreneurs skills! Jane was an excellent student and athlete. Bob and Jane started their life together milking cows! Raising a family was a challenge as Bob and Jane had numerous businesses and were dealers in livestock-renting bulls! They also operated “Hale Fur Company”, “Hales Wood Yard”, “Hale Sportswear” and “Hale Fireworks”. In her spare time, Jane also worked at Buffalo Elementary School and was the PTA President. Jane also helped at the Dallas County Extension Center testing soil for the county. Later in life, Jane developed “Hales Crossing”, “Time Out Café”, “Bison Acres Flea Market” and “Flowerworks flowers and gifts” and was active with these businesses until her passing. Jane was active in “Hale Fireworks” for 64 years and was affectionately known world-wide as the “Firecracker Lady.” Jane was also instrumental in the inception of “Hale Real Estate” and “Hale Enterprise, LLC.” Jane was a published author of more than 30 books, short stories and poems. She was the President of the “Ozark Writers Guild.” Jane with son Mitch has been active on the board of the “Ozark Writers Inc.”, where Jane was the President. Jane wrote a weekly column for over 20 years in the voice of her childhood “Little Janie Shewmaker,” which evolved into two published books, “Every Day is Father’s Day” and “Every Day is Mother’s Day.” Jane wrote articles for “Springfield Magazine” and was given the honor of five cover stories for the magazine, one of which included Jane, granddaughters, Chayla and Cali and another that included granddaughter Chayla and niece Courtney Shewmaker. Jane stayed active with her writing over the years and won numerous writing awards, some of which were with her son Mitch. Jane was the co-founder of the “Dallas County Alumni Association” in 1971, she and life-long committee members and friends, aka “her girls” developed numerous scholarships with fellow Alumni to further the education of Buffalo High School graduates. Year after year, this committee produces three pageants, “Miss Dallas County,” “Mini Miss” and “Mini Master”. For many years, the committee sponsored the Buffalo High School Carnival. This group also helped build the Alumni Headquarters building. For all her achievements with the schools and her community, Jane was elected into the “Dallas County Hall of Fame”. On May 28, 1996, Jane was honored to help Dr. Tommy Macdonnell carry the Olympic Torch as it passed through St. Louis, Missouri. Jane wrote, “As Doctor Tommy and I were running admist cheering crowds in St. Louis that day, he edged the torch my way. “I need help,” he said. And suddenly I was carrying the torch! Later Jane found out that the man she nominated out of 2,500 nominations wasn’t fatigued from carrying the torch, he just wanted her to be able to “share the moment of glory with him”. Jane loved her Time Out Café and her Sportswear store and traveled extensively with her fireworks family to many demos, shoot-outs and conventions throughout the United States. Jane was a unique, one of a kind woman with a kind heart. Life was always more interesting with Jane around. She firmly believed if you dream it, you can achieve it! Her 85 year legacy proves that! Jane was a loving wife, mother, grandmother and great grandmother. Jane was extremely proud of all four of her sons and her family was her greatest accomplishment. She was a woman that enjoyed all aspects of life. Jane made an impact to a community, her schools, family and friends. To know her was to love her and if she loved you…you knew it! We celebrate her life and numerous accomplishments….she will never be forgotten, but will be greatly missed. Funeral services will be conducted at 10:00 a.m. on Saturday, October 5, 2019 at the Buffalo First Baptist Church. Visitation will be from 5:30-9:00 p.m. Friday at the Church. In addition to flowers, the family has requested donations be made to the Alumni Association for a scholarship in her name.

Myra Jane Shewmaker Hale, daughter of the late Blaine and Inez (Sadler) Shewmaker was born on August 28, 1934 in Buffalo, Missouri and departed this life on September 29, 2019 in Springfield, Missouri. At the time of her passing Jane was... View Obituary & Service Information

The family of Mrs. Myra "Jane" Hale created this Life Tributes page to make it easy to share your memories.

Send flowers to the Hale family.