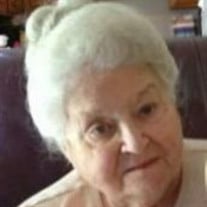 Nadine (McGowan) Cantrell was born on April 29, 1926 and passed away December 13, 2020 at the Magnolia Square facility in Springfield, Missouri after a long illness and complications from Covid-19. She was 94 years of age at the time of her death. Nadine was the oldest of eight children born to Hayward and Ollie McGowan of Mountain Grove, Missouri and outlived all of her siblings. Nadine had four brothers: Bud McGowan, Wes McGowan, Ronnie McGowan, and Pat McGowan all from Mountain Grove, Missouri. She had four sisters: Jaxie Merchant of Graff, Missouri; June Reidesal of Kansas City, Missouri; and Charlene Smith of Mountain Grove, Missouri. Nadine was married to Donald Cantrell on January 23, 1943. They had four children: Jaxie Earlene Mount of Columbia, Missouri; Donnie Ray Cantrell and wife Cheryl of Springfield, Missouri; Darlene Lacey of Springfield, Missouri; and Donna Janette Yochum and husband Daryl from Montgomery, Texas. Six Grandchildren: Ricky Mount of Columbia, Missouri; Stephen Cantrell of Springfield, Missouri; Fred Lacey, Jr. of Pittsburg, Missouri; Dawn Barnes and husband Tony of Springfield, Missouri; Leigh Kozick of Cyprus, Texas; and Julia Kearns and husband Jason from Cary, North Carolina. Twelve great-grandchildren: Mason Mount of Columbia, Missouri; Jessi Ray Allen and husband Devin of Springfield, Missouri; Justine Lacey of Buffalo, Missouri; Garrett Lacey and Lane Lacey of Pittsburg, Missouri; Mikala Deck and husband Travis of Springfield, Missouri; Evan Barnes and wife Casey of Somerset, Kentucky; Myla Morrison, Charlie Kozick, and Sylvia Kozick of Cyprus, Texas; and Iris Kearns and baby sister (due January 2021) of Cary, North Carolina. Two great-great-grandchildren: Evie Deck of Springfield, Missouri and Devonte Allen of Springfield, Missouri. Nadine was preceded in death by her husband, her parents, her siblings, and son-in-law, Fred Lacey. She was life-long member of Church of Christ. She was baptized into Christ at an early age and attended a small congregation at Ben Davis, Missouri for years before moving to Elkland, Missouri. She and Donald dairy farmed at Mountain Grove then later at Elkland. After Donald’s death in 1995, she moved to Springfield. Nadine worked at the Brown Shoe Company in Mountain Grove for many years as well working on the dairy farm with her husband. She was later a caregiver in Buffalo as well as in Springfield. She was a hard worker and worked well up into her 80s. Nadine would talk about her school years when she and her siblings would have to walk to school to a one room schoolhouse. They would have to take their shoes and socks off to cross Beaver Creek even in the depth of winter. She was raised on a farm where she and her brother Bud had more responsibilities than the younger siblings. They worked hard but always had plenty. Nadine loved to crochet and quilt but her real love was painting. She had numerous afghans, quilts and canvas and china paintings. She will be missed by family and friends. She will be laid to rest next to her husband, Donald, in Buffalo, Missouri. Graveside services will be conducted at 2:00 p.m. on Thursday, December 17, 2020 in the Maple Lawn Cemetery with Bro. Brad Shockley officiating. Escorts will be Stephen Cantrell, Fred Lacey, Jr., Garrett Lacey, Lane Lacey, Ricky Mount, and Tony Barnes. Services are under the care and direction of the Cantlon-Otterness & Viets Funeral Home of Buffalo.

Nadine (McGowan) Cantrell was born on April 29, 1926 and passed away December 13, 2020 at the Magnolia Square facility in Springfield, Missouri after a long illness and complications from Covid-19. She was 94 years of age at the time of... View Obituary & Service Information

The family of Nadine Cantrell created this Life Tributes page to make it easy to share your memories.

Send flowers to the Cantrell family.