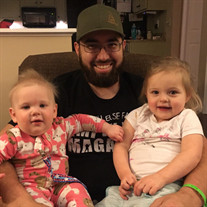 It is with heavy hearts that the family of Nathan Bruce Duff announce that he passed away suddenly on August 27, 2019 at the age of 31, just 11 days before his 32nd birthday. Nathan was born on September 7, 1987 in Springfield, MO to Brad and Janet (Roderick) Duff. He accepted Jesus Christ as his personal savior on April 14, 1994 and was baptized at the Windyville Bridge in Big Niangua River on May 22, 1994. He resided on the family farm in Tunas his entire life. His favorite place to be was outdoors on the farm – whether it be checking his own cows or working on one of his “projects.” His sidekick Hank, his border collie, was by his side for 13 years and was always ready to “load up.” He was always known for being a hard worker and always willing to pitch in and help any family member he could. If he wasn’t working on the family farm, he was busy fixing up his first house down the road from the one he was raised in. One of his favorite roles was being a “fun-cle” to his two nieces. He made sure they had large supplies of candy, the best (and biggest) toys, and introducing them to the country life. He loved his job at the Rifleman Gun and Pawn in Marshfield. He got to combine two of his favorite activities – talking and guns. He often stated how much he loved this job and how it was the best job he had ever had. Nathan was preceded in death by seven great-grandparents, Gene and Vera Roderick of Halfway, Esther and Othel Duff of Tunas, Glenn Davison of Buffalo, Roma and Edith Hicks of Buffalo. He is survived by his parents, Brad and Janet Duff of Tunas; his two sisters, Julie (Sam) Vance of St. Louis and Holly Duff of Port St. Lucie, Florida; his two nieces, Leah and Cora Vance of St. Louis; four grandparents, Bruce and Janiece Duff of Buffalo, Don and Sherry Roderick of Halfway; one great-grandmother, Clara Davison of Buffalo; and a host of uncles, aunts, cousins, and friends that will miss him deeply. Funeral services will be held on Saturday, August 31, 2019 at the First Freewill Baptist Church in Buffalo, MO with Bro. Al Cannon and Bro. Billy Dugan officiating. Escorts will be Lynn Duff, Dan Roderick, Jay Roderick, Al Cannon, Billy Dugan, and Clyde Kimura. Honorary escorts will be Calvin Dryer, Brandon Duff, Brandon Mankey, Caleb Roderick, Jacob Roderick, and Brylie Turner. Music will be provided by Samuel Vance. Interment will be in the Kirk Chapel Cemetery in Tunas, MO under the care and direction of the Cantlon Otterness & Viets Funeral Home of Buffalo. Visitation will be Friday, August 30, 2019 starting at 6:30p.m. at the First Freewill Baptist Church. In lieu of flowers, the family requests donations be made to the Kirk Chapel Cemetery.

It is with heavy hearts that the family of Nathan Bruce Duff announce that he passed away suddenly on August 27, 2019 at the age of 31, just 11 days before his 32nd birthday. Nathan was born on September 7, 1987 in Springfield, MO... View Obituary & Service Information

The family of Mr. Nathan Bruce Duff created this Life Tributes page to make it easy to share your memories.

It is with heavy hearts that the family of Nathan Bruce Duff...

Send flowers to the Duff family.