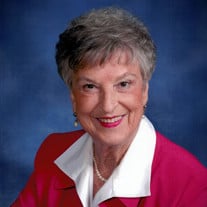 Nettie Lou (Cline) Baker was born on August 8, 1931 to Noah and Ida (Vest) Cline, and departed this life on September 23, 2018 at Mercy Hospital in Springfield, MO. At the time of her passing she was 87 years, 1 month, and 14 days of age. Nettie grew up on the family farm eight miles south of Buffalo. She attended grade school at Flint Ridge and Church at Center Point. At the age of 12 her family moved to Springfield, MO. She continued her education at Shady Dell Elementary and finished her schooling at Strafford High School. Nettie met and married Billy W. Baker and they moved to a farm north of Buffalo where they had dairy cows for a few years. They moved to Kansas City, MO and started their family having two sons, Floyd and Stephen. They wanted to raise their sons in the country, so they moved back to Dallas County to a Century Farm and welcomed their third son, Scott. Nettie was a farm wife and mother and spent many happy days with her family milking cows, boating at the lake, trail riding, and camping. She was always interested in politics and decided to campaign for the office of County Treasurer. She was elected in 1967 and continued to serve in that office for 28 years. She retired in December of 1994 to care for her husband Bill when his health began to fail. Nettie loved her husband and her sons and would always tell her family and friends that she lived a very blessed life. She became a Christian at the age of 12 and loved her Lord who helped her get thru many heartbreaks and sad times. She was a member of the Buffalo First Christian Church and faithfully attended for 56 years. Nettie was asked how she wanted to be remembered, and her answer was that “I was always friendly to everyone.” Nettie was preceded in death by her beloved husband Bill; her parents; an infant son; her son Stephen who died in a traffic accident at the age of 19; two sisters, Beatrice and Juanita; one brother, Deryle; and great-grandson, Gabriel Spence. She is survived by two sons, Floyd & wife Evelyn Baker of Rolla, MO and Scott Baker and Susan of Buffalo, MO; two granddaughters, Lindsay & husband John Woodward of Des Moines, IA and Sarah & husband Cliff Spence of Tunas, MO; six great-grandchildren, Riley, Shelby, Luke, and Lily Spence and Olivia and Hunter Woodward; and three sisters, Madeline Priess, Maxine Stoops, and Jan & husband Garey Reeves. She also leaves other family members and many friends who will all truly miss her. Funeral services will be conducted at 2:00 p.m. on Wednesday, September 26, 2018 at the First Christian Church with Pastor Tim Case, Pastor Jennifer Long, and Cliff Spence officiating. Escorts will be Cliff Spence, Kirk Lemmons, Scott Bennett, Marq Reeves, and Darrell Willis. Interment will be in the Memorial Gardens of Memory Cemetery under the direction of the Cantlon Otterness & Viets Funeral Home of Buffalo. Visitation will be from 1:00-2:00 p.m. Wednesday at the Church. In lieu of flowers the family requests donations be made to the First Christian Church.

Nettie Lou (Cline) Baker was born on August 8, 1931 to Noah and Ida (Vest) Cline, and departed this life on September 23, 2018 at Mercy Hospital in Springfield, MO. At the time of her passing she was 87 years, 1 month, and 14 days of age.... View Obituary & Service Information

The family of Mrs. Nettie Lou Baker created this Life Tributes page to make it easy to share your memories.

Send flowers to the Baker family.