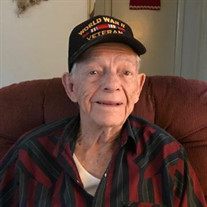 Noah Parrish Adams was born on August 10, 1925 near Preston, MO the son of John and Susie (Mustain) Adams. They later moved to Urbana where he grew up on a farm and went all twelve years in Urbana School. He departed this life on January 27, 2022 in Springfield, Missouri. At the time of his passing, he was 96 years, four months, and 16 days of age. Noah entered the Army in 1943. He was sent to Camp Barkley, Texas where he was trained in the medical school. From there, he was sent to New Caledonia. While there he transferred to the 96th Inf. Division. They fought on the Island of Leyte Philippines, and later landed on the island of Okinawa on April 1, 1945. He was wounded on May 10, 1945 and sent back to the United States. After spending time in the hospital, he was discharged on December 31, 1945. On July 6, 1946 he married Nina Ash, and to this union one daughter was born. While in service he was awarded the Bronze Star medal, Purple Heart, Good Conduct, Pacific Theatre with two Bronze Stars, American Campaign medal, World War II Victory medal, Combat Inf. Badge, and the Philippine Liberation medal with Bronze Star. After returning from the war, several of the men formed a basketball team. They would travel anywhere and play basketball. He was lucky enough to play the Harlem Globetrotters three times, one at Urbana, once in Hermitage and once at Worland, Wyoming when he lived there. They never beat them but it sure was fun. In 2001 he married Maxine Evans of Buffalo. He accepted Christ as his savior in 1938 and was baptized into Urbana Baptist Church. Noah was preceded in death by his first wife Nina; his second wife, Maxine; his parents; his daughter, Brinda; three brothers, John, Paul, and Silas Adams; and two sisters, Rowena Bowers and Lawana Webb. He is survived by a sister-in-law, Marge Adams and a stepdaughter, Sonja Hougham. He also leaves nieces, nephews, other family members, and many friends who will all truly miss him. Funeral services will be held at 2:00 p.m. on Monday, January 31, 2022 in the Cantlon-Otterness & Viets Funeral Home. Escorts will be John Adams, Matt Lindsay, David Jenkins, James Miller, Richard Beavers, and Kenneth Wickham. Honorary escorts will be Jimmie Jasper, Ron Harless, Kenny Johnston, his DAV buddies, and the DAV Ladies Auxiliary. Interment will be in the Mission Ridge Cemetery under the care and direction of the Cantlon-Otterness & Viets Funeral Home of Buffalo. Visitation will be from 1:00-2:00 p.m. Monday at the Funeral Home. In lieu of flowers, the family requests donations be made to the Mission Ridge Cemetery Fund, Jacob’s Ladder, or St. Jude’s Children’s Hospital.

Noah Parrish Adams was born on August 10, 1925 near Preston, MO the son of John and Susie (Mustain) Adams. They later moved to Urbana where he grew up on a farm and went all twelve years in Urbana School. He departed this life on January... View Obituary & Service Information

The family of Noah Parrish Adams created this Life Tributes page to make it easy to share your memories.

Send flowers to the Adams family.