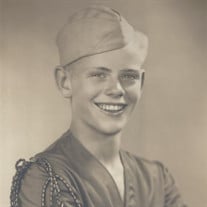 Noel Pike, 83, of Flemington passed away April 21, 2019 at Citizens Memorial Hospital in Bolivar following a long battle with cancer. Noel was born to Max and Marion (Jones) Pike on May 27, 1935 in Monticello, Illinois. Noel was a precocious child and full of energy. From the time he was a young boy he spent summers at Culver Military Academy where he particularly enjoyed archery, swimming, sailing, basketball and football. Some of his fondest memories were of spending time at his father and grandfather’s Ford & Cadillac car dealership and on their family’s farms. Growing up, he always looked up to his older sister, Joan and always looked out for his baby brother, Bill. Noel excelled in sports at Monticello where he played football, basketball, baseball and ran track. Noel followed in his father’s footsteps by being an all-state athlete. He was named to the Illinois all-state football team his sophomore, junior and senior years. During his senior year he was named the Football Prep of the Week by the Chicago Tribune. Noel earned a congressional appointment to the Annapolis Naval Academy but declined this honor, instead he chose to forge his own path in life. He was a small business owner, hotel manager, insurance salesman, automotive manager, publisher and spent one year as part of a think tank. Noel enjoyed traveling and lived across the country. In 1961 he married the love of his life; Doris, and although they were polar opposites, they were true partners throughout their 57 years of marriage. Doris stood by his side, never wavering in her support of him. Noel was preceded in death by his parents, Max and Marion; his step-mother, Ann; and his loving wife, Doris. Noel is survived by his sister, Joan Peterson & husband John of Barrington, Illinois; brother, Bill Pike & wife Donna of Richardson, Texas; sister-in-law, Helen Weurtz of Sandusky, Ohio and close family friend Rob Wood of Monticello. He leaves behind his seven children and their partners: Mark and Barbara Pike, Cedar Bluff, Alabama; Phillip and Karen Pike, Desert Hot Springs, California; Elizabeth and Tommy Noreika, Millford, Pennsylvania; Cheryl Pike and fiancée Duane Pritchard, Bristow, Oklahoma; Max and Marti Pike, Springfield; Heather and Chris Stidham, Urbana; and Katherine Johnson and fiancée, Michael Walker, Springfield; 24 grandchildren, numerous great-grandchildren, and many nieces and nephews who will all truly miss him. Noel was a professing believer in Christ and was a member of the Assembly of God Church. He was proud of his testimony and would share it with all who would listen. Noel will be remembered as being a free spirit who was loyal, loving and caring. He instilled in his children a good work ethic and was always there to lend a hand to others. He loved regaling others with stories and was always willing to impart life lessons to his children and grandchildren. Funeral services will be conducted at 1:00 p.m. on Saturday, April 27, 2019 at the Cantlon Otterness & Viets Funeral Home with Pastor Gary Urich officiating. Escorts will be Doug Stidham, Devon Stidham, Adam mason, Dilan Heflin, Michael Walker, and Chris Stidham. Special music at the graveside will be provided by Devon and Meredith Stidham and Phillip Pike. Interment will be in the Hopewell Cemetery in Tunas under the care and direction of the Cantlon Otterness & Viets Funeral Home of Urbana. Visitation will be from 6:00-7:00 p.m. Friday at the Funeral Home. Donations may be made to the Urbana First Baptist Church Building Fund.

Noel Pike, 83, of Flemington passed away April 21, 2019 at Citizens Memorial Hospital in Bolivar following a long battle with cancer. Noel was born to Max and Marion (Jones) Pike on May 27, 1935 in Monticello, Illinois. Noel was... View Obituary & Service Information

The family of Mr. Noel Douglas Pike created this Life Tributes page to make it easy to share your memories.

Send flowers to the Pike family.