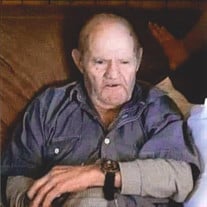 Ollie K. “OK” Clark, Sr., son of the late Thomas Samuel and Ethel (Mode) Clarke was born on December 22, 1930 in Oklahoma and departed this life on August 12, 2020 at his home near Buffalo, MO. At the time of his passing he was 89 years, seven months, and 19 days of age. OK was reared and attended school in Oklahoma. After his schooling he started working for his parents before joining the Air Force. After serving his country, O.K. went to work in the construction industry, building roads, bridges, and many buildings. He was a very hard-working man, always doing his best to provide for his family. He was united in marriage to Jenette Lenore on June 2, 1973 and to this union two children were born, one of whom survives him. OK enjoyed spending time outdoors hunting and fishing to provide food for his family. OK was preceded in death by his wife Jenette; his daughter, Renee Clark; his parents; three brothers; and one sister. He is survived by his son, Ollie Clark, Jr.; three stepsons, Bill Bailey, Weasley Thompson, and Kerry A. Bailey; one adopted son, Dennis Clark; and three grandchildren, Frank Clark, Jessie Clark, and Jaylynn Clark. He also leaves other family members and friends who will all truly miss him. Funeral services will be conducted at 11:00 a.m. on Monday, August 17, 2020 in the Cantlon-Otterness & Viets Funeral Home with Pastor Mark Elliott officiating. Escorts will be Ollie Clark, Jr., Steven Perish, Charlie Milledge, Kyle Milledge, Thomas Curtain, Kyla Perish, and Frank Clark. Interment will be in the Memorial Gardens of Memory Cemetery under the care and direction of the Cantlon-Otterness & Viets Funeral home of Buffalo. Visitation will be from 10:00-11:00 a.m. Monday at the Funeral Home.

The family of Mr. Ollie OK Clark created this Life Tributes page to make it easy to share your memories.

Send flowers to the Clark family.