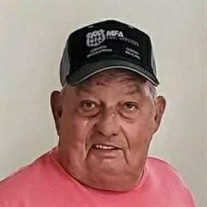 Owen Ray (Gabby) Richardson was born on April 7, 1942 in Long Lane, MO to Charlie and Nancy (Berry) Richardson and passed away on January 13, 2021 at Mercy hospital in Springfield MO surrounded by his family. At the time of his passing, he was 78 years of age. Owen was united in marriage to Catheryn A. Scurlock on May 25, 1962 and to this union 3 children were born. Gabby retired from Owens-Corning Fiberglass in 1978. He then moved back to Missouri and started working for MO-Dot the very next day. He retired from MO-Dot in 2004. Gabby and Catheryn stared milking cows in 1979, he retired from that in 2011. They also ran beef cattle, for the last few years him and Jeff had partnered up on. Gabby and Jeff bought the County Line store and ran it for about 12 years with the help of Shelly. He loved his family and friends more than anything, they were his world. He has never met a stranger; he could strike up a conversation with anyone. Gabby was survived by 3 children: Shelly and husband Steve Young of Urbana, Doug and Marybeth Richardson of Long Lane, Jeff and wife Elizabeth Richardson of Long Lane. Life companion of 34 years, Helen Lewis and her daughter Mindy Lewis of the home, 1 brother Ivan and wife Kay Richardson of Lebanon, 1 sister Hazel and husband Dean Bowman of Lebanon. He had 12 grandchildren, Shauna Hall, Christy Glor, Danica and Clayton Young. Stephanie Gemeinhardt, Kyle, Preston, and Dustin Richardson. Briley and Kolar Karney, Gabbie and Taylor Richardson. Also 17 great grandchildren and many other relatives and friends. He is proceeded in death by his wife Catheryn Richardson, his parents Charlie and Nancy (Berry) Richardson. 2 brothers and their wives Gordy and Marjorie Richardson and Donald and Georgia Richardson. 1 sister and husband Melvina and Loyal Dismang. Services for Gabby will be 2:00 pm Sunday, January 17, 2021 in the Cantlon-Otterness & Viets Funeral Home in Buffalo, Missouri with burial to follow in the New Hope Cemetery in Long Lane, Missouri under the direction of the Cantlon-Otterness & Viets Funeral Home of Buffalo, Missouri. Visitation will be from 6:00 to 8:00 pm Saturday, January 16, 2021 in the chapel. in lieu of flowers memorials may be made to the St. Jude's

Owen Ray (Gabby) Richardson was born on April 7, 1942 in Long Lane, MO to Charlie and Nancy (Berry) Richardson and passed away on January 13, 2021 at Mercy hospital in Springfield MO surrounded by his family. At the time of his passing,... View Obituary & Service Information

The family of Owen Ray "Gabby" Richardson created this Life Tributes page to make it easy to share your memories.

Send flowers to the Richardson family.