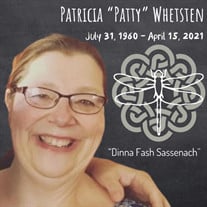 It is with profound sadness that we announce the passing of Patty Whetsten on April 15, 2021. Patty was a loving wife, devoted mother, and friend to all whose lives she touched. Her larger-than-life persona and trademark cooking will not be forgotten. She was born on July 31, 1960 in Buffalo, MO. She was the youngest daughter of the late G.C and Dorothy (“Goggie”) McDowell. Patty had many accomplishments in life which included; growing up being a farm girl and going to college, working in healthcare and for the Dallas County prosecuting attorney’s office, as well as marrying the love of her life, Bob Whetsten, on May 2, 1987. If you asked Patty what her number one accomplishment was, it would have been becoming a mother to her son, Kyle Whetsten. From that moment on, she was a devoted mother to him and considered a second mother to Kyle’s best friends: Seth Wommack, Mike Zanzie, Mikey Horstman, Chris Horstman, Kyle Vest, Zach Enokido, Eric Enokido, and Travis Jones. When Patty befriended you, not only were you a friend, you became a member of her family. This also meant to expect at least a 7-day supply of your favorite dish of food. Some of Patty’s favorite things to do were gardening, cooking (sometimes for 100+ people, because, why not?), watching Outlander (and all that is Scottish-related), crafting, decorating, traveling, and spending time with her family. Patty was preceded in death by her parents, G.C. & Dorothy (“Goggie”) McDowell; her maternal grandparents, Bus and Ruby Barclay; and her paternal grandparents, Guern and Helen McDowell. She is survived by her husband, Bob Whetsten; her son, Kyle Whetsten (Kimberly Whetsten); her sister, Pam Thiesen (and husband); a host of nieces and nephews that she loved dearly; along with many other friends and family who will deeply miss her. A memorial will be held on Saturday, April 24, 2021, from 2:00-4:00 p.m. at the Cantlon-Otterness & Viets Funeral Home. Come stop by and celebrate the incredible life Patty Whetsten led. If you have a special story about Patty, we would love to hear it. Cremation rites were accorded under the care and direction of the Cantlon-Otterness & Viets Funeral Home of Buffalo.

It is with profound sadness that we announce the passing of Patty Whetsten on April 15, 2021. Patty was a loving wife, devoted mother, and friend to all whose lives she touched. Her larger-than-life persona and trademark cooking will not be... View Obituary & Service Information

The family of Patricia "Patty" Whetsten created this Life Tributes page to make it easy to share your memories.

It is with profound sadness that we announce the passing of Patty...

Send flowers to the Whetsten family.