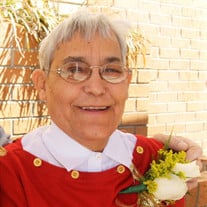 Patsy Jean (Wilson) Durrington of Louisburg passed away on November 30, 2020 after a long battle with Diabetes and Kidney disease. She was born March 26, 1941 in Buffalo, MO, the 7th of 8 children born to James Monroe and Martha Monervia (Pruett) Wilson. Patsy attended White Palace and Buffalo High School, graduating in 1958. She was united in marriage to Everett Durrington on March 4, 1960 at Buffalo. To this union, two sons were born, Doug and Greg. She was saved and baptized at an early age and was a long-time member of the Buffalo Bible Baptist Church. Patsy and Everett first made their home in Wichita, KS while Everett worked for Boeing and other aircraft manufacturers. Wishing to get away from city life and be closer to family, in 1966 they purchased the farm at Louisburg, moving there permanently in 1968. Patsy worked for the Dallas County R1 School District for 39 years, from 1971 until 2010, retiring only because of her health. If not for her health issues, she would have continued to work as she so enjoyed working with the kids every day. Patsy enjoyed spending time at every opportunity with family, especially her grandchildren. She loved to have dinner with family, often preparing the entire meal herself until her health no longer allowed. She also enjoyed working on wood crafts, watching major league baseball, and watching college and professional basketball. Patsy was preceded in death by her parents; three brothers; and two sisters. She is survived by her husband of 60 years, Everett; two sons, Doug & wife Pam and Greg & wife Brenda two grandsons; one granddaughter; three great-grandchildren; three great-great-grandchildren; one stepdaughter, Dolores; one brother; and one sister. She also leaves many nieces, nephews and friends who will all truly miss her. Funeral services will be held at 1:00 p.m. on Saturday, December 5, 2020 in the Cantlon-Otterness & Viets Funeral Home with Dr. Douglas Earls officiating. Escorts will be Douglas Durrington, Dylan Durrington, Dale Wilson, Tim Jackson, J.R. Gross, and Tyler Mercado. Interment will be in the Maple Lawn Cemetery under the care and direction of the Cantlon-Otterness & Viets Funeral Home of Buffalo. Visitation will be from 6:00-8:00 p.m. Friday at the Funeral Home. In lieu of flowers, the family requests donations be made to the Kidney Foundation or the Diabetes Foundation.

Patsy Jean (Wilson) Durrington of Louisburg passed away on November 30, 2020 after a long battle with Diabetes and Kidney disease. She was born March 26, 1941 in Buffalo, MO, the 7th of 8 children born to James Monroe and Martha Monervia... View Obituary & Service Information

The family of Patsy Jean Durrington created this Life Tributes page to make it easy to share your memories.

Patsy Jean (Wilson) Durrington of Louisburg passed away on November...

Send flowers to the Durrington family.