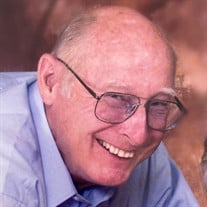 Paul Frederick Pickens, son of George and Thelma (Bell) Pickens, was born in Lawrence, Kansas on December 24, 1933, and passed from this life on Monday, February 7, 2022, at Citizens Memorial Hospital in Bolivar, Missouri. At the time of his passing, he was 88 years, one month, and 14 days of age. Paul married Anita Harding on July 24, 1955, in Perry, Kansas at the Perry United Methodist Church. Together, they had four children: Timothy, Sheila, Jeffrey, and Alesia. Paul enjoyed his years in the Army and working as a civilian in communications at Edwards Air Force Base in California, where he gained deep and lasting friendships with his co-workers. In his retirement years, he enjoyed working on projects around the house, watching Westerns, and keeping up with current politics. He was a hard worker, always eager to lend a helping hand. He found great joy in spending time with his children, grandchildren, and great-grandchildren. They will always remember his big hugs and fun sense of humor. Paul loved our Lord and Savior Jesus Christ. He attended and was a member of Grace Methodist Church in Buffalo, Missouri. He cared for his church family deeply. Paul is survived by his wife of 66 years, Anita; his four children; 12 grandchildren; 17 great-grandchildren; and many nieces, nephews, and friends. Paul was a wonderful husband, father, grandfather, and uncle. He loved the Lord, his family, friends, and church family. He will be greatly missed. Funeral services will be held at 10:00 a.m. on Saturday, February 12, 2022, at the Cantlon-Otterness & Viets Funeral Home in Buffalo, Missouri. Visitation will be prior to the service at 9:00 a.m. at the funeral home. Interment will follow the service at Maple Lawn Cemetery in Buffalo.

Paul Frederick Pickens, son of George and Thelma (Bell) Pickens, was born in Lawrence, Kansas on December 24, 1933, and passed from this life on Monday, February 7, 2022, at Citizens Memorial Hospital in Bolivar, Missouri. At the time of... View Obituary & Service Information

The family of Paul Frederick Pickens created this Life Tributes page to make it easy to share your memories.

Send flowers to the Pickens family.