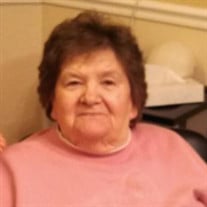 Peggy Loretta (Pulley) Nicholas was born September 23, 1938 to Anna and Delmar Pulley at their home. She went to her eternal reward at Buffalo Prairie Care Center August 3, 2020 at the age of 81 years, 11 months, and 3 days old. Even in this current time, her sister was able to be by her side in her last days. Peggy started to Cresent School at age 5. She was always proud that she was the youngest to attend. She always said it was because she was the only child in their part of the country not attending school. She attended Buffalo High School and graduated with the class of 1955. During her school years she waitressed at various cafes in Buffalo. Peggy was baptized at an early age at Bennett Springs. She practiced her faith throughout her life in the local church family of the Free Will Baptist. On December 19, 1959 she married Wayne Nicholas in Miami Oklahoma. This union was blessed with two sons, Donald Warren Nicholas and David Lynn Nicholas. Her family was most important to her. She enjoyed being a mother and grandmother. Peggy's kind and helpful personality was an asset to any job she chose. She worked many years at Casey's Corner store and Keys Manufacturing in addition to working on the family dairy farm. She spent her last 11 years at Buffalo Prairie Care Center. She made many friends and left a lasting impression on those who cared for her on a daily basis. The family wishes to thank those special individuals for their kind and caring hearts. Peggy was preceded in death by her parents; an infant sister, Wanda Jean; her husband, Wayne; and both sons, Donald and David. She leaves to morn her passing her sister Patsy Trimble; two daughters, Penny Hauhn and Pam Claspill; a son, Mike Nicholas; grandchildren, Eric Nicholas, Nathan Pierce, and Ashly Pierce. She also leaves several great-grandchildren, nieces and nephews. Cremation were accorded under the care and direction of the Cantlon-Otterness & Viets Funeral Home with internment at Sweeney Riverview Cemetery. A memorial service is scheduled for 4:00 p.m. on September 19th, 2020 at the cemetery. In memory of Peggy, tribute donations can be made in her honor to the Alzheimer's Matching Gift Challenge or the Sweeney Riverview Cemetery fund.

Peggy Loretta (Pulley) Nicholas was born September 23, 1938 to Anna and Delmar Pulley at their home. She went to her eternal reward at Buffalo Prairie Care Center August 3, 2020 at the age of 81 years, 11 months, and 3 days old. Even in... View Obituary & Service Information

The family of Peggy Loretta Nicholas created this Life Tributes page to make it easy to share your memories.

Send flowers to the Nicholas family.