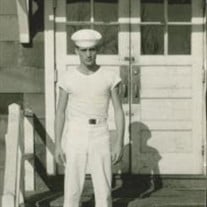 Perry(Jack) Nelson Bartee, Sr. was born May 8, 1937 at Plad, the son of David Rice Bartee and Cora Elizabeth (Waller) Bartee. He died at Mercy Hospital, Lebanon due to Covid-19 with family by his side at the age of 84 years and 2 months. He was united in marriage to Sharon Rae Havener on January 7, 1961 in Plattsburg, Missouri. He attended the Willow Springs School for 8 years. He joined the United States Navy in November 1955. After completing Basic Training at Great Lakes Naval Base, he was assigned to the U.S.S Talladega (APA-208) as a boiler tender. He spent four years touring the Pacific in places such as Japan, China, Philippines, Korea and Guam. After his discharge in 1959, he returned to Kansas City, Missouri. He worked at Gustin Bacon Fiber Glass in Kansas City, Kansas several years. He then went to work for a machine shop in Kansas City, Kansas to learn to be a machinist. He and his family moved to Osceola, Mo., then back to Dallas County. He went to work for Tyler Pipe in Marshfield, Mo. until his retirement in 1999 as a machinist and tool and die maker. He was an avid hunter and fisherman. Osceola was his special place to fish and his special hunting place was the tiny house. He was preceded in death by five brothers, Marion Frances Bartee, William Thomas Bartee, Charlie Cyrenus Bartee, David Earl Bartee and John Lee Bartee: Five sisters, Katherine Florence Bartee, Mildred Beatrice Bartee, Grace Bell Renner, Frankie Ardella Glass, and Betty Elizabeth Long Davis, and his daughter-in-law Paula Sue Lankford Bartee. Survivors include his wife, Sharon of the home, his daughter Terri Rae Hunget and husband Robert of Elkland, his son Perry Nelson Bartee Jr., Buffalo, his sister Esther Marie Bartee, Tunas, two grandchildren, granddaughter Brittany Altic and husband Zachery of Buffalo, Grandson Brett Shewmake and Andrew of Plattsburg, Mo. three great grandchildren, Peyton Scott, Makayla Jade, and Mekenley Raine Altic of Buffalo and many nieces and nephews who will sadly miss him. Private family services will be held at a later date with cremation rites accorded by Cantlon Otterness & Viets of Buffalo.

Perry(Jack) Nelson Bartee, Sr. was born May 8, 1937 at Plad, the son of David Rice Bartee and Cora Elizabeth (Waller) Bartee. He died at Mercy Hospital, Lebanon due to Covid-19 with family by his side at the age of 84 years and 2 months.... View Obituary & Service Information

The family of Perry "Jack" Nelson Bartee Sr. created this Life Tributes page to make it easy to share your memories.

Send flowers to the Bartee family.