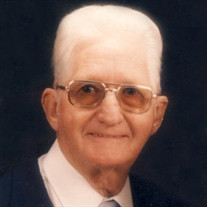 Ray Junior Burd, son of the late Ray Warren & Susan Tremella (Phillips) Burd, was born on August 16, 1926 in Long Lane, Missouri and departed this life on May 19, 2018 in Long Lane, Missouri. At the time of his passing he was 91 years, 9 months and 3 days of age. Junior was born and raised in Long Lane and graduated from Buffalo High School in 1944. At the age of 10 he became of member of Pisgah Baptist Church where he was saved and later baptized in Dousinberry Creek. After graduating from high school, he joined the U.S Army weighing in at 109 pounds. He was one of the first to see the white sand beaches of Mexico. After his time of service, he was united in marriage to Flora Elizabeth Freeman on March 17, 1945. During their 67 years of marriage, two children were born, both whom survive him. Together they moved to Kansas City, Missouri where he worked at Ford Motor Company from 1951-1953. He then returned home to Long Lane where he purchased a dairy farm; Where he lived and raised his family until his passing. He began working for the United States Postal Service in 1975 and hauled mail in the Long Lane, Phillipsburg and Cross Timbers area until 1993. He was a Strong Democrat and will be truly missed by all who knew him. Junior was preceded in death by his parents; his wife, Elizabeth; his four siblings, Izola, Enola, Cecil and Loyal; and one grandchild, Miranda Willis-Fulton. He is survived by his two daughters, Vickie (Johnny) Stepp and Valery (Randy) Willis; one sister, Nell Price; three grandchildren, Shannon (Craig) Ferrell, Shawn Stepp, and McKenzie (Jon) Hicks; one great-grandchild, Hailee Stepp; and one great-great-grandchild, Ryatt Reide. Funeral Services will be conducted on Wednesday, May 23, 2018 at 2:00 p.m. at the Cantlon Otterness & Viets Funeral Home with Craig Ferrell Officiating. Music will be conducted by Sheryl Ferrell. Escorts will be Doug Mathews, Jo Mathews, Carl Bliss, Dawn Bliss, Kevin Bennett, and Sherry Bennett. Honorary escorts will be Wendell Cansler and Michelle Cansler. Visitation will be held on Tuesday, May 22, 2018 from 6:00-8:00 p.m. at the funeral home. Interment will be in the Pisgah Cemetery under the direction of the Cantlon Otterness & Viets Funeral Home of Buffalo. In Lieu of flowers please make memorial contributions to the Pisgah Cemetery. Online condolences and register book entries may be left at www.cantlonotterness.com.

The family of Ray Junior Burd created this Life Tributes page to make it easy to share your memories.

Send flowers to the Burd family.