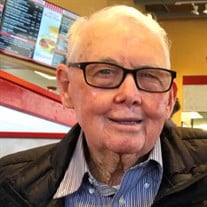 Rexford Jones “Rex” Hamlet, son of the late William Bertram and Ethel Mae (Vest) Hamlet, was born on September 8, 1930 in Buffalo, MO and departed this life on February 21, 2021 at his home near Louisburg, MO. At the time of his passing he was 90 years, five months, and 12 days of age. Rex was reared and attended school in Buffalo, MO. He proudly served his country in the United States Army from 1952-1954 and was stationed in Alabama and South Carolina. He was united in marriage to Margaret Myrtle Hudgins on August 6, 1953, and to this union three children were born, all of whom survive him. Rex was saved at the Louisburg Baptist Church in 1964. He proudly served the Church as a Sunday School Teacher, a Deacon, and as the Song Leader. His faith was very important to him, and he loved sharing the love of Jesus Christ with everyone he met. Rex and Margaret purchased a dairy farm in 1954, and together they spent many years working land and cattle, earning many awards along the way. He enjoyed trout fishing, was an avid St. Louis Cardinals fan, and was an active member of the Louisburg Lion’s Club. Rex’s family was very important to him and he would always make time to play with his children in the yard. He was a very interesting man, and never lost his thirst for knowledge. Rex was preceded in death by his wife Margaret; his parents; and his sister, Clarabelle Young. He is survived by his children, Debbie Briant, Kathy & Sam Ball, and Brent Hamlet; five grandchildren, Candice Ball, Judson Ball, Matthew Eubanks, Chase Hamlet, and Brock Hamlet; four great-grandchildren, Bailey and Alexandra Richards, Marigold Ball, and Tristan Burks; and his brother, Tuff Hamlet. He also leaves other family members, his church family, and many friends who will all truly miss him. Graveside services will be held at 2:00 p.m. on Thursday, February 25, 2021 in the Memorial Gardens of Memory Cemetery with Bro. Loren Dryer officiating. Escorts will be Sam Ball, Candice Ball, Judson Ball, Bailey Richards, Matthew Eubanks, Chase Hamlet, and Brock Hamlet. Music will be provided by the Hamlet Family Singers. Visitation will be held from 12:30-2:00 p.m. Thursday at the Cantlon-Otterness & Viets Funeral Home. In lieu of flowers, the family requests donations be made to the Louisburg First Baptist Church.

The family of Rexford Jones "Rex" Hamlet created this Life Tributes page to make it easy to share your memories.

Send flowers to the Hamlet family.