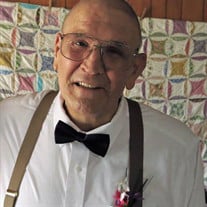 Richard John Beall, age 80, died on Thursday, March 7, 2019. He was being cared for by his family in their Lebanon home. Richard was born in St. Paul, Minnesota, to Theresa (Lee) and John Beall, and was the older of two sons. He later moved with his parents to Hesperia, California, where his father was in the service. After being honorably discharged from the Air Force, Richard met his wife of 55 years, Lorna Kerin. They were married in the Little White Chapel in Las Vegas, Nevada, June 5, 1964. Richard graduated from the National School of Technology in Los Angeles, California, in 1964 and entered the electronics field. In addition to owning his own appliance-repair business, Richard worked for many years at Electrovert in Camdenton, Missouri. Richard was a servant of the Lord throughout his life. For more than 40 years, he was an active member of Trinity Evangelical Lutheran Church where he served in leadership positions, including chairman of the Board of Evangelism. He took great joy in sharing the good news of salvation in Jesus. While in Hesperia, he was an active member of Faith Lutheran Church where he served as Elder and Sunday School Superintendent. Richard was an avid square dancer, starting at 20 years of age and continuing for more than 30 years. He generously volunteered his time teaching square dancing at the Hughes Senior Center in Lebanon for 13 years. Volunteerism and servant leadership were part of Richard’s legacy. Besides volunteering for both the senior center and church, he taught square dancing to the mentally disabled and was a literacy coach helping adults learn to read. Richard is survived by his loving and devoted wife, Lorna; his brother, Jim Beall; his six children, Lonny Beall (wife Melodie), Jana Stormont (husband Dan), Kami Wilson (husband Dale), Kerin Matthews (husband Rick), Christa Beall Diefenbach (husband Doug) and James Beall (wife Tiffany). Richard is also survived by 14 beautiful grandchildren: Aubrey, Alexa, Joshua, Nicole, Jeremy, James, Ashleigh, Brooke, Ella, Nathan, Elijah, Eliot, Eastan and Levi. Services will be held at Trinity Lutheran Church (1300 Kent Drive, Lebanon) on Tuesday, March 12, 2019, at noon. A pot luck lunch will follow. In lieu of flowers, memorials may be made in Richard’s name to Open Hands Outreach Center for the Blind and Visually Impaired (c/o Trinity Lutheran Church, 1300 Kent Drive, Lebanon, MO 65536).

Richard John Beall, age 80, died on Thursday, March 7, 2019. He was being cared for by his family in their Lebanon home. Richard was born in St. Paul, Minnesota, to Theresa (Lee) and John Beall, and was the older of two sons. He later moved... View Obituary & Service Information

The family of Mr. Richard John Beall created this Life Tributes page to make it easy to share your memories.

Send flowers to the Beall family.