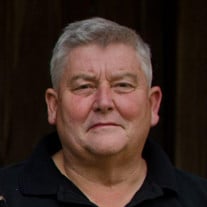 Not sure what to send?

Rickey Dean Kelb passed away in his home in Buffalo, Missouri on Monday, January 3, 2022. He was born on October, 21, 1949 at St. Johns in Springfield, Missouri. He was the second of four children born to Harold Samuel and Goldie Mae Roberts Kelb. After elementary school in Springfield, the family moved to Elkland in 1959 where he attended school through the 8th grade. He then attended Marshfield High School. After meeting Brenda Taylor at the Gem Center in Fair Grove, they married on July 16, 1971 at Union Mound Church in Elkland. Rickey and Brenda were blessed with three children, Travis, Heidi, and Will. Rickey accepted Christ at the age of 8 at Glenstone Baptist Church in Springfield, MO, and has been a follower of Jesus ever since. Rickey had a few different jobs, including driving a truck, but his true passion was always farming and manning the tractor in the hay field. He never met a stranger and considered all those he met dear friends. He had great respect and admiration for his wife, often saying she was the hardest working woman he knew. He was very proud of his kids and often bragged about them. His two favorite little people brought him great joy and called him Pop. Rickey was preceded in death by his parents Harold and Goldie Kelb. Rickey is survived by his wife of 50 years, Brenda Beatrice, son, Travis Taylor; daughter, Heidi Nicole; son, Will Roy and wife, Jessica; two grandchildren, Owen and Tatum Kelb all of Buffalo; brother, Terry Lynn and wife, Janice of Brokaw, WI; sister, Shelly Rene Price and husband, Dennis of Elkland; sister Melissa Ann Lipscomb of Elkland; nieces; nephews; many other relatives and many friends. Memorial Services for Rickey will be held at 1:00 p.m. on Saturday, January 29, 2022, at the Cantlon-Otterness & Viets Funeral Home in Buffalo, Missouri. In lieu of flowers, memorial contributions can be made to Convoy of Hope or Samaritan’s Purse. Interment will be at Pleasant View Cemetery in Elkland, Missouri.

Rickey Dean Kelb passed away in his home in Buffalo, Missouri on Monday, January 3, 2022. He was born on October, 21, 1949 at St. Johns in Springfield, Missouri. He was the second of four children born to Harold Samuel and Goldie Mae Roberts... View Obituary & Service Information

The family of Rickey Dean Kelb created this Life Tributes page to make it easy to share your memories.

Rickey Dean Kelb passed away in his home in Buffalo, Missouri...