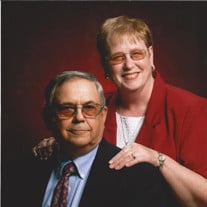 Robert Eugene Dollins, son of the late O. B. and Goldie Mae (Olliver) Dollins was born on March 19, 1937 in Granite City, IL and departed this life on October 21, 2020 in Bolivar, MO. At the time of his passing he was 83 years, seven months, and two days of age. Bob was reared and attended school in Granite City, IL. He enlisted in the United States Navy and proudly served his country. After his service Bob began working on the loading docks before beginning his career as a roofer. He worked as a roofer for many years before an accident left him paralyzed. He was united in marriage to Lois Schollmeyer on April 3, 1977. Together they ran Antique Stores and Flea Markets in Illinois until retiring and moving to Missouri in 2000. Bob enjoyed watching Cardinals Baseball, Blues Hockey, Kansas City Chiefs Football, and going fishing. He was a member of the Calvary Chapel Freewill Baptist Church and would spend his Fridays calling church members who were homebound. Bob loved his church family and enjoyed checking in on the ones that could not make out of their homes. He had a great personality, a great sense of humor, and loved giving people a hard time. Bob was preceded in death by his parents. He is survived by his wife Lois of the home; five sons, Michael Dollins of Granite City, IL, Rick & wife Carol Dollins of Helena, AR, Robert & wife Jenny Dollins of Dato, AR, Joey & wife Candy Melbourne of Alton, IL, and Darren Melbourne of Buffalo, MO; three daughters, Donna & husband Michael Reagan of Pocahontas, AR, Sharon & husband Michael Payne of Urbana, MO, and Patty & husband Blake Harrod of Warren, AR; and two brothers, Bill & wife Anne Dollins of Granite City, IL and James & wife Sandy Dollins of Independence, MO. He also leaves many grandchildren, great-grandchildren, his church family, and many friends who will all truly miss him. Memorial services will be held at 11:00 a.m. on Saturday, October 24, 2020 at the Calvary Chapel Freewill Baptist Church with Dr. Douglas Earls officiating. Visitation will be from 10:00-11:00 a.m. Saturday at the Church. Cremation rites were accorded under the care and direction of the Cantlon-Otterness & Viets Funeral Home of Buffalo.

Robert Eugene Dollins, son of the late O. B. and Goldie Mae (Olliver) Dollins was born on March 19, 1937 in Granite City, IL and departed this life on October 21, 2020 in Bolivar, MO. At the time of his passing he was 83 years, seven months,... View Obituary & Service Information

The family of Robert Eugene "Bob" Dollins created this Life Tributes page to make it easy to share your memories.

Robert Eugene Dollins, son of the late O. B. and Goldie Mae (Olliver)...

Send flowers to the Dollins family.