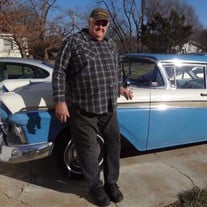 Roger Stuart Crawley age 75 of Buffalo, Missouri was born January 5, 1943 in Hinsdale, Illinois the son of Geoffrey & Benji Crawley. He departed this life on December 23, 2018 peacefully in his home. He was a longtime lake resident and... View Obituary & Service Information

The family of Mr. Roger Stuart Crawley created this Life Tributes page to make it easy to share your memories.

Send flowers to the Crawley family.